A Pivotal Month Ahead 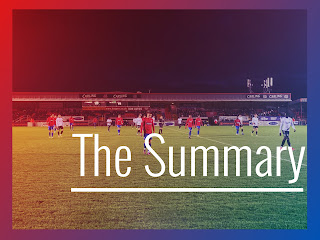 Three wins is what we needed and what we got, the Daggers propelled up to 5th with the nine point maximum secured over the festive period.

This added to the league victory over play-off rivals Grimsby earlier in December, making it four wins from four in the league.

Dare I say it, the likes of Dover and Aldershot were expectant victories, though we still had to beat them - some fans already had six out of those nine points on the board, disappointed if we didn’t go and get nine.

I say this not to belittle the victories and performances but bring some perspective as we head into the new year against tougher opposition this month. Starting today with Torquay, then a huge FA Trophy tie at home to Southend, before the likes of Stockport and Halifax to round off the month.

This is the month that will define our season, going into it in good form, points on the board - can we beat the teams around us this month? If we can then the play-off prospects become more of a reality than a hope, we take charge of the situation.

Players returning from injury, Josh Walker impressing over the festive period, and newcomers like Morias showing what he has to offer. As well as our new rock at the back Zouma, is it all coming together at the right time for McMahon?

Equally, it could fall apart just as fast, so we need to keep the momentum starting today in Torquay. Then, if we can get over the line in front of the Victoria Road crowd against Southend, as we did earlier in the campaign, that will just breed confidence.

Not to look too far ahead, but the excitement once again around the team is palpable, so bringing it back to the next test - Torquay sit in 13th eight points behind Dagenham.

These mid-table sides are the ones who the Daggers must overcome if they are to put themselves firmly into play-off contention and not merely a team with an outside chance - looking over their shoulder.

McMahon stated in his interview that every player is available except Dean Rance, so with an almost fully-fit squad unlike the last few games - there is a firm belief the Daggers can pick up all three points today.

With the likes of Johnson, Jones and McCallum fit it’s a selection headache for Daryl and it’ll be interesting which eleven he goes for come 2pm today. Who is omitted to make way for those three or do they only make the bench?

On that we’ll have to wait and see in what is a pivotal month for the Daggers, here’s hoping next week we’re looking back on another three points gained.

Until then, Happy New Year and Come On You Daggers.