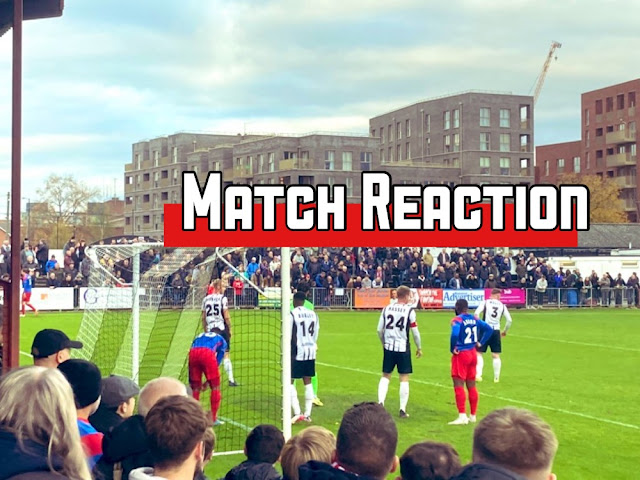 A trip to Maidenhead and an opportunity to register just a second win in seven games, an expected victory despite the absentees in the Daggers squad. That expectation was ultimately surpassed, a resounding 1-4 victory which consolidated the view of Dagenham as a side to be challenging at the to of the table this season. The full debut of Ibby Akanbi, too, went better than expected – three assists and a goal. However, the Colombian magician Angelo Balanta inevitably stole the limelight – back to his best – securing a hat-trick at York Road.
The game began with a couple of scares early on, with the Maidenhead faithful looking to beckon the ball into the net – always behind the goal they’re shooting at the rare, unsegregated ground. However, the corners were dealt with, and McMahon’s men were able to withstand the early pressure. Unlike last Monday which saw Turnbull head home from a corner and poor defending there ultimately cost the Daggers a place in the competition.
Progress. The game continued and the Daggers grew in confidence, controlling the midfield and threatening the Maidenhead back line which looked vulnerable early on – as expected when in their last game they conceded 7!
However, when Matt Robinson picked up the ball on the edge of the box it didn’t endanger Lovett’s goal – sky-high – the home crowed jeered. Those jeers were returned by the away following, as Josh Kelly’s half-volley went very wide of the mark minutes later.
Hough, those same supporters had their hearts in their mouths as the Maidenhead attacker looked through on goal but Kenny Clark put in a brilliant tackle to deny him a shot at goal.
Despite a fewer number of attempts at goal, it was clear there was one team in the ascendency as the red and blue of Dagenham pinned the Magpies back. That greater threat was to be evidenced by a one goal lead moments later as Ibby Akanbi beat the full-back to put in a cross. Then, a perfect header from Balanta, straight back across the goal, just nestled in the top corner – Dagenham fans behind the goal – elated.
It was the breakthrough we couldn’t find for ninety minutes at home on Monday, despite our dominance, but we’d got it through Angelo Balanta after 28 minutes. The belief was there that McMahon’s men would go on to in it, even this early on, but the fact more goals were needed was much appreciated.
In an attempt to seize complete control of the game, the Daggers pushed for another, Mauro Vilhete came closest in the immediate aftermath of Balanta’s heroics – the midfielder’s effort just inches away as it rattled the bar.
But the Visitors weren’t to rue that missed chance for too long, as minutes later Ibby Akanbi once again got the better of his man; causing havoc down that side. He fired a shot low and hard but Lovett was equal to it, though the Maidenhead number 1 couldn’t keep out the rebound from Balanta from close-range.
0-2 up inside forty minutes, Balanta with a brace, all the away side had to do now was hold out until half-time. Indeed they did, despite a late resurgence from the hosts to pull one back before the break, Devonshire’s men left with it all to do in the second ’45.

HT 0-2| Beautiful first goal and great half all-round. Took our chances and now just need to look to build on the 2-goal lead!

It was an end-to-end opening to the first half, with the home side winning a free-kick early on as they looked for a quick goal to get back in the game. The free-kick came to nothing though and that kick-started a lull in play following a broken down Daggers attack up the other end.

The game turning into a cagey affair for around 10 minutes, until Callum Reynolds popped up looking to add his name to a scoresheet - unleashing a half volley. However, his effort from the edge of the box was well held by Lovett in the Maidenhead goal, the score remaining 0-2.

Then, after a spell of pressure resulting in a well-worked move, the hosts found the back of the net as Josh Kelly headed home a fantastic cross. A good goal just 13 minutes into the second half and there was a belief from the Magpies they could pull level; us away supporters however remained quietly confident of victory.

That confidence was nearly justified by Ibby Akanbi five minutes later as he tried his luck from 25 yards out, making Rhys Lovett work in the Maidenhead goal. He couldn't find a third himself for the Daggers, but his second effort in as many minutes was parried into the path of free-scoring Balanta - securing his hat-trick - in the same way he got his second: right place, right time.

The midfielder silenced critics and proved he was back to his best, providing his and Dagenham's third of the afternoon. It wasn't long before the creator of the previous three, Ibby Akanbi, made a mark on the scoresheet himself with a beautiful strike, getting him his first goal in a Dagenham shirt - Lovett collecting the ball from his net for the fourth time.

The goalmouth action appeared to have dried up as we entered the last ten minutes, and the job seemingly done, McMahon made his first change as MOTM contender Ibby Akanbi made way for Myles Weston. The substitute nearly added salt to the wounds of the home side just minutes from time as his brilliant solo run made inroads into the box; cutting it back to Vilhete whose effort was well-stopped by Rhys Lovett.

The final whistle blew shortly after as Maidenhead were put out of their misery and the Daggers were left to rejoice a performance with the ruthless, clinical nature that had gone missing for a few weeks. But one thing is for sure, Balanta is back and dare I say it, Dagenham are back! A demolition job at York Road.

Finally, here are YOUR player ratings as voted for by supporters, unsurprisingly very positive and reflective of a fantastic performance and result:

If we continue with that level of performance going into next week against Yeovil and Eastleigh, I think we'll see us climb the table, so long as we maintain that re-discovered clinical nature.