Despite the unpredictability of such encounters, here is how myself and Shrimpers supporter Ryan see the game going, with plenty of build-up for you to enjoy below…

A huge game, two rivals meeting competitively for the first time in years, for the first time outside of league football and a game that has added significance due to the managerial situation at Southend. These are the sort of games where the league table and current form; it all goes out of the window, the occasion takes hold, and it is who turns up on the day.

However, hints at who will turn up on the day can be sought from the recent performances and ultimately, the personnel – man for man – who has the better chance? The Daggers have had a rough(er) time of it of late compared to their flying start which saw them unbeaten in 6 games (winning 5 of them).

But, off the back of three straight league defeats, the incredible comeback against Wealdstone seemed to mark a revitalisation of the character of the team that had been brought into question – had the wheels fallen off? No, the 1-2 victory with ten men proved that the wheels are very much on the Daggers car, McMahon driving them to a hopefully successful season.

On the other hand, you have our opponents in Southend who have three new drivers in Darren Currie, Mark Bentley and Kevin Maher – the latter in overall control. This, following a concerning start to life in non-league for the Shrimpers; signalling they’ll perhaps be staying here for a little longer than planned.

Here is what Southend fan Ryan has made of their campaign so far:

Where do I even begin to start? You hear successful managers, players etc say that winning becomes a habit, well for us over the last few years I believe that losing has become a habit and unfortunately it’s carried over to this season as well. That coupled with the short tenure of Phil Brown, who was never the right man to come back in the first place, has seen us start the season so badly and has many of us fearing yet another relegation fight. One of Brown’s failings I believe was his insistence of playing 5 at the back… with a left back playing at centre back and two wingers having to play out of position as wing backs. The players never looked comfortable and with that we just never looked like competing in games.

Looking ahead to the match itself, and the individuals who could step up to the occasion, here is who Ryan said to watch out for, for the Visitors – including a familiar face:

Rhys Murphy is obviously a player you guys know well and has looked good in the games I’ve seen of him. He looks a constant threat (when given the service) and contrary to what fans of Yeovil said about him before he joined, from what I’ve seen he puts in a shift every game and doesn’t give defences a moments rest. Jack Bridge though playing out of position is probably our most creative player and again just doesn’t stop running throughout the 90 minutes. If we are to get a result, those two will be involved one way or another.

Myself, selecting a 'one to watch', I think that the Daggers this season are obviously a great team as a collective, but we have required the odd player to step up from time to time. The likes of Walker, Jones and even Will Wright, but I feel our key player today will be the returning Mauro Vilhete. We’ve missed him in recent weeks and the influence he has on the team and the positive, free-flowing football – he’ll be a key component to any success on the pitch.

I also asked Ryan on what he feared about McMahon’s men going into this one:

You score goals, plenty of them. Last weekend we had to field a much changed defence with only two recognised defenders in the team and my worry is, we haven’t heard anything from the club this week regarding returning players and if we have to field a similar defence, I worry that you’ll fill your boots.

On what I fear of Southend, perhaps a boost with their new coaching team, players eager to impress? Also, with some positivity brought into the camp with their appointments there could be a confidence boost? But, really, I see nothing to fear in this out of sorts Southend side other than the fact that they are Southend playing against Dagenham and so will be very much up for it; especially due to their new coaches being all too aware of the significance of the rivalry.

However, that’s the only way I see the Blues taking all three points and toppling the Daggers, wanting it more and being more alert – quality wise I believe we’ve got the upper-hand.

To predictions, and how we both see our teams lining up... 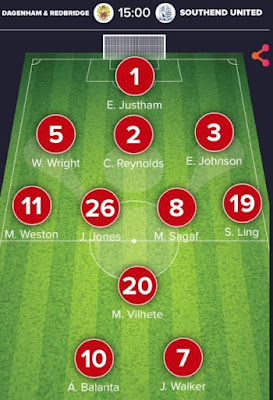 The enforced absence of McCallum, through suspension, is of course a blow but I feel the Daggers can function and function well without him in the side. A notable absence from my XI, through choice, is that of Matt Robinson in the heart of the midfield. I’ve stated before how I believe both Jones and Robinson are fantastic players but don’t seem to work well together, so unfortunately feel the need to leave one out. I’m not confident this will happen tomorrow, but it is how I would approach the game with Sagaf offering more fluency and forward-thinking in the midfield.

Here is how Ryan lines up his Southend XI: 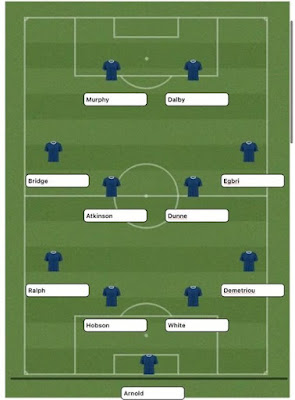 I’d expect to see something like this providing everyone I’ve selected is fit... as I’ve previously said though, we’ve had no updates this week from the club regarding the fitness of players.

So, there you have it, the talking is done and ultimately as I said at the start – it’s down to who wins their battles on the pitch in this one. Let’s hope the Daggers can get back to winning ways in the league and see off the Seasiders in front of a bumper Victoria Road crowd!