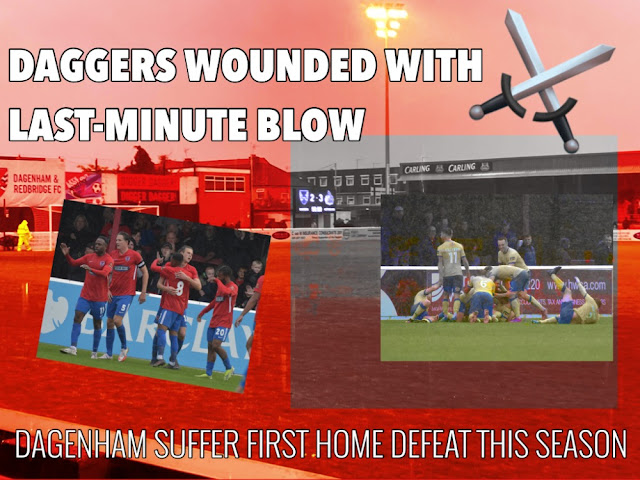 The stage was set for an enticing encounter but both teams would face a common opposition in the weather conditions, the first time this season the supporters on the terraces felt the bitter cold and drizzle in the Sieve.

This was to transcend into a bitter defeat on the pitch, as the Daggers couldn’t hold back the Altrincham flood in the second half, despite going into the break a goal to the good. A series of mistakes that began to creep in toward the end of the tie; from lacklustre defending to a perceived lack of that extra desire by some.

Anyhow, these errors led to the first home defeat of the season as McMahon’s men leaked three goals in an afternoon from which lessons can be learnt; hopefully though, the result itself quickly forgotten.

I went into the match optimistic, as we sat top of the tree, hoping to remain there come Saturday evening; what was there to worry about with the way we’d been playing? Then, in the drizzle as the game got underway, it didn’t take long before the inevitable first goal went to the opposition – more precisely, gifted. This, as in most cases this season, wasn’t due to a poor start by us but just perhaps the odd lapse in concentration at the back which gives way for the opposing attackers to fire home.

Where we are currently at the club was perfectly depicted by the mood of the crowd once we went behind, beside this general acceptance we go behind every game, was also a confidence that we’d score soon enough and we all knew where the next goal was coming from. A stark contrast to a couple of years ago and even at times last season where goals were in short supply; testament to the changes we’ve seen under McMahon and this current squad.

Our confidence was justified just over 20 minutes later as a good move found Mauro Vilhete two yards out at the back post; on hand to tap home and level the scoring. The Robins seemed a side we were capable of defeating, yet whether we did or not was down to us taking our chances and it seemed we were set to replicate the victory against Solihull - a week prior - as half-time loomed.

None other than Matt Robinson was to fire a rebound into the back of the net to put the hosts ahead and I must admit I felt with the momentum we had, the question of ‘how many?’ began to creep in. An arrogance gained from six victories out of a possible eight and scoring 22 goals in that time; the players had to maintain focus and be ruthless, yet respectful of the opposition.

HT 2-1 | A replica of last weekend, if the second half goes the same way we’re in for a treat!

All I can think is a similar arrogance crept into the players’ minds as the second half wore on, they failed to ever really dominate in the way they so often had in previous fixtures, the second half having always been stronger than the first. The grey skies saw the Daggers in the spotlight, and you felt it was these sorts of moments, testing the ability to see the game off, that separates those title challengers from play-off hopefuls.

The home side didn’t start too badly in truth, Weston having a header cleared off the line and a few promising moves just breaking down in the final third; overhit crosses from corners – they were the issues in attack. But, there was still danger of throwing away a slender lead.

Patiently, we waited for McMahon’s men to kill the game, but all that was to follow was an increasing sense of Altrincham pushing back. So much so, the defence looked in disarray at moments in the second ’45, the likes of Mooney and Colclough threatening the hosts’ back line.

The warning signs were there as Colclough was to be the one whose ambitious effort cannoned off the crossbar – Justham beaten. The Daggers were quick to introduce Balanta in an attempt to double their lead, replacing Joey Jones, but this only seemed to destabilise the midfield further.

An unusual situation for us in the second half, a situation we haven’t been in all season, where we looked to see out the game but couldn’t appear to consolidate our lead. This was now a chance for the players to show how they coped in such situations; the organisation and ability required to see the game out.

In contrast to those 15 minutes before the break, it was now very much backs against the wall for McMahon’s men, the woodwork and Justham helping them maintain their lead and place at the top of the table. But, they could only hold out for so long, as on 87 minutes, substitute Hancock was on hand to fire home from 20 yards out – a deserved equaliser you had to say.

The reply from the Daggers had to be swift, and they won a corner as the fourth official indicated a minimum of three minutes; the rain getting heavier as the clouds over Victoria Road darkened. But, that was cleared behind and the resultant corner saw captain Angelo Balanta head over the bar.

The referee now looking at his watch, we’d take a point at this stage, but a quick throw-in for the visitors in the Daggers half mounted in a promising Altrincham attack. Mooney reached the edge of the box and tried his luck… the Altrincham fans had woken up – elated – with the soaked home supporters now just heading for the exits.

FT 2-3 | The first time this season I feel we’ve got worse as the game went on. The first time as well, bar Wrexham, where things didn’t fall for us in the final third.

A couple lacking energy it appeared, but I won’t go on. Just looking ahead to Woking - a big game! #COYD ⚔️ pic.twitter.com/amkjmi7uaR

Some others opted to abuse the Robins players who celebrated in front of the Sieve, but the damage had already been done, last-minute heartbreak as the Daggers fell to their first home defeat of the season.

The first defeat witnessed by American owners, Peter Freund and Craig Unger, at Victoria Road too so a less than impressive afternoon but it wasn’t a disaster and we can certainly bounce back against Woking tonight.

Here are how, you, the supporters voted in the Player Ratings: 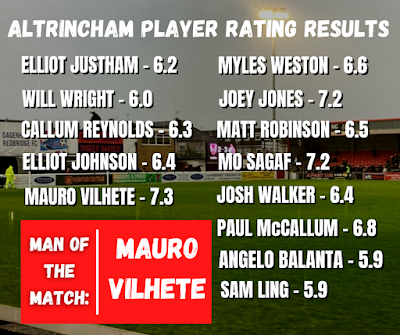 I'd say these ratings are largely accurate, and it's hard to get dragged down into negativity after a defeat, but I think they deliver a good representation of the performances across the whole game.
Will Wright and Matt Robinson, to name just a couple were players who were uncharacteristically 'shy' in challenges in the second half in my view. Stopping short of a strong tackle, the type of which they so often put in: week in, week out - just as one example. Symptomatic perhaps of a side who appeared a little tired or on edge in the second half when trying to see out the game.
But, I'll look to the star performers in the eventual loss, and Mauro Vilhete is a player I very quickly run out of superlatives for. His quality on the ball is nothing short of phenomenal; the ability to run rings around the opposition - Cruyff turns, spins and all - doing so with ease.
Then, to Joey Jones, a different type of player but nonetheless a solid display and you felt perhaps there was something missing that pulled the side together when he came off. A decision I believe that was certainly regrettable, him being replaced by Balanta - McMahon in search of a third.
Ultimately, the game on Saturday provided a wake-up call, anyone can certainly beat anyone in this league. So, going into Woking a bounce-back is imperative and we want to ensure this is a blip as oppose to a dip in form.
Until next time, thanks for reading,
Keane
COYD 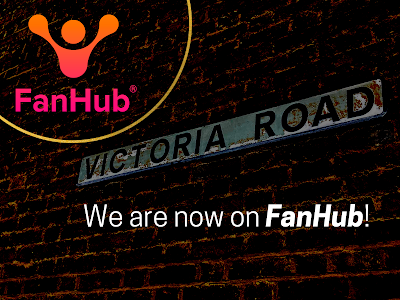