Blues Blown Away By Dominant Daggers 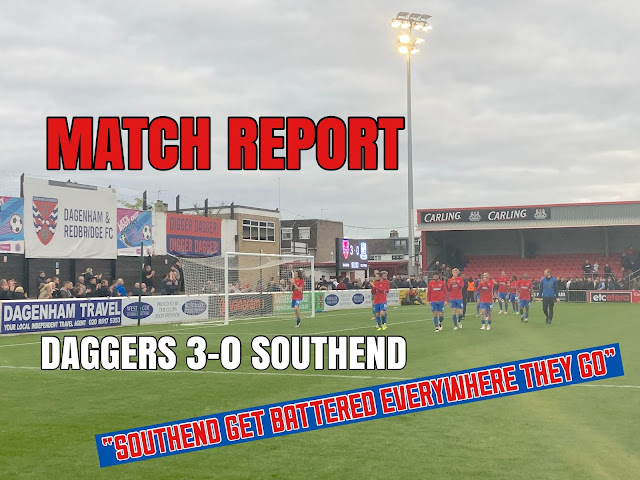 A performance worthy of great praise, the six sensational minutes which secured the win captured the spirit of the entire ninety; where the Daggers looked confident and assured they could cruise to victory – indeed they did – sending the Shrimpers back home empty-handed. The joy and unrelenting taunts from home supporters were symptomatic of the disparities and role reversal of these two rivals: a high-flying Dagenham team and a derelict, dejected Southend.

The first ’45 began in front of the packed Victoria Road crowd with both sides throwing caution to the wind, although the Daggers always looked the more threatening, likelier to score. The best opportunity of the opening 20 minutes saw Scott Wilson hit the side-netting, many supporters initially thinking he’d scored, as he met a low Sagaf cross.

A stark contrast to a week earlier and in many games this season, the Daggers had started well, and attacked with real intent from the off. Despite the absence of key strikers Walker and McCallum, the pressure was mounting on the Shrimpers defence and you felt surely it was only a matter of time before McMahon’s men found the back of the net.

However, Seaden and his defence had managed to hold out the Dagenham surge, the Visitors managing to pose some threat of their own – however minimal – Ogogo and Ferguson both shooting high and wide from the edge of the box. Perhaps a warning sign for the hosts, but the Seasiders had to do better in these positions if they were going to get on top in the Essex Derby.

Around the 40-minute mark, a key opportunity saw Will Wright find Angelo Balanta and the Daggers packed into Victoria Road (certainly around me in the sieve) all held their breath as the Colombian ventured into the box and lined up his shot… However, the hero at Wealdstone couldn’t find the net on this occasion as Seaden denied him from eight yards – frustrating.

Time was ticking down before the break and for all the chances the scores remained level, Weston the latest to shoot wide of the mark, was it just one of those days? Then, we conceded a corner on the stroke of half-time, the Shrimpers looked to get their noses in front despite being second best in the first half.

However, former Dagger Abu Ogogo’s header went over the bar and nestled on top of the net as the referee signalled for half-time – relief for us home supporters. It was a solid first-half display with some lovely passages of play from McMahon’s men, reminiscent of those opening games where you felt we were in control, and a far-cry from the performance at the last league encounter against Boreham Wood.

There were no changes at the break as the rivalry renewed and that confidence we would score just grew and grew with the home support in full belief a goal was imminent. There was a corner straight away for Dagenham which ultimately came to nothing, but the Seasiders were backs against the wall for the first five minutes. Rhys Murphy also entering the referee’s book, much to the delight of the Dagenham crowd.

However, those events were to pale into insignificance as the Daggers went in front sending the terraces into ecstasy and the Southend support were left in despair. The ball was played in low into the box and the midfielder was in the right place at the right time to fire home!

Instantly McMahon’s men were at it again, in the ascendency, as Weston stormed down the left wing leaving Egbri in his wake and delivered a pitch perfect ball into the box; Ling rising highest and heading home.

There was sense of disbelief among the crowd that within a matter of minutes Dagenham were 2-0 up and in cruise control; jubilation with renditions of “Southend get battered everywhere they go” audible from the Daggers faithful.

Southend get battered everywhere they goooo.

They were on a rampage.

Dagenham & Redbridge had made it 3-0 within 6 minutes and that was enough humiliation for Southend fans to head back home: “We can see you sneaking out!”, “Southend get battered everywhere they go!”, “Is there a fire drill?”. The joy and unrelenting taunts from home supporters were symptomatic of the disparities and role reversal of these two rivals; a high-flying Dagenham team and a derelict, dejected Southend.

It was a case of damage limitation for the Visitors as McMahon’s men pushed for more goals, and limit that damage they did; although that damage was irreparable, and the Daggers had successfully condemned them to defeat.

A convincing victory for Dagenham & Redbridge and a statement that they are back! After three straight league defeats, a win following on from the FA Cup delight at Grosvenor Vale. Although the Southend performance was rather uninspiring, it doesn’t detract from the competence of the Dagenham display and the quality football they played.

We’re back on track, following the derailment of three straight defeats, and now we must keep steaming down this track in the hope of remaining near the top. Tomorrow’s fixture is crucial in this, though as I’ve always said, if we can maintain the levels of performance in spite of a narrow defeat – I’ll take that.