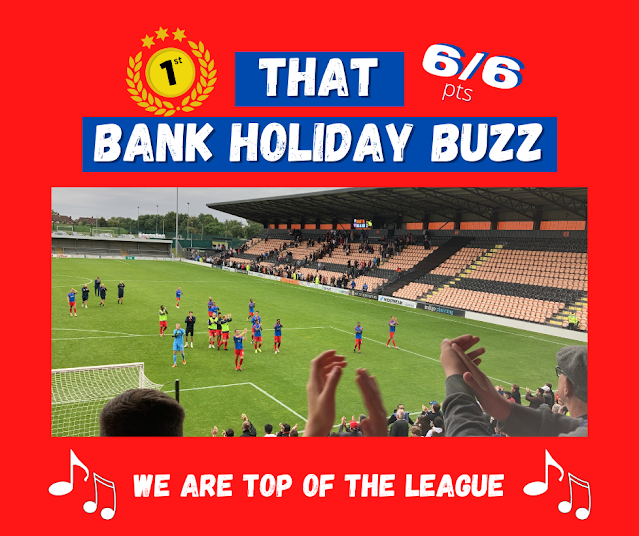 WE ARE TOP OF THE LEAGUE!

Before looking ahead to what could happen, let’s enjoy this moment we find ourselves in and relive that bank holiday weekend which saw us pick up six points and a clean sheet – to remain at the very top of the non-league pyramid!

Where better to begin than the victory that kicked off the weekend and continued the Daggers’ perfect start! The 4-2 victory saw many star performances and the renewal of the new-found partnership up front of Walker-McCallum, which was forced at Edgeley Park a week earlier due to Balanta’s injury.

With the quality Balanta possesses, I was concerned that his injury could hinder our chances but Josh Walker proved his worth yet again on Saturday (as he did with his debut goal) and has certainly played his way into that first team – arguably the first name on the team-sheet.

His pace coupled with that power and presence of Paul McCallum up top is certainly an exciting formula which will bring guaranteed success up front this season, they both netted along with Matt Robinson and Myles Weston to wrap up the three points.

The latter, Weston, scored a fantastic individual solo goal and him coming off the bench to replace Ling as a more attacking option proved that we have the depth required to challenge this season. The quality of players McMahon now has at his disposal allows him to make these tactical decisions effectively and he certainly did that on Saturday – for which I credit him for.

There was a disappointing goal conceded after a mistake at the back on Saturday, reminiscent of those conceded last season, which frustrated and concerned some; despite the game having been wrapped up by then. We can’t allow those mistakes to creep in as they did last season, else they will cost us a play-off spot once again.

However we did ultimately win the game and, as aforementioned, that Cheek goal was nothing but a consolation due to our clinical finishing up the other end. I feel that our attack will be our best form of defence this year as shown in that game and the score-line, so long as we outscore the opposition I’m more than happy with that – it certainly makes for exciting football!

Below you can find the player rating results from the Bromley game, as voted for by supporters: 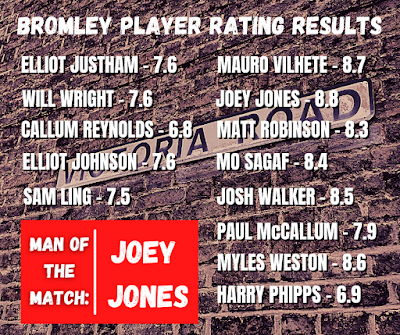 We didn’t have to wait too long before we could enjoy watching the team once more, just 48 hours later, the 500-strong Daggers support swarmed the Hive. We weren’t to be left disappointed as our demands of ‘more of the same’ were more than met as McMahon’s men breezed past the Bees – not being stung once.

The clean sheet topped off a superb victory at a disheartened Barnet where we looked comfortable, once again, for a large chunk of the 90 minutes – this time they were not required to go behind to pull off a win.

This was partly thanks to a couple of fantastic saves by Elliot Justham early on, but from 15 minutes onwards, because they worked well as a team they comfortably saw past Barnet.

The transitions from defence to attack are I think the most impressive part of the playing style this season. The likes of Sagaf, Vilhete and Robinson in the middle of the park link up the play brilliantly and are always providing an outlet to the three centre backs.

Onto the defence then, and they were flawless on Monday, dominant in the air and strong in the tackle – Elliot Johnson in particular impressed me at the back. This back three of Wright, Reynolds and Clark is certainly one that can take us far as they all have the defensive capabilities, alongside their comfort on the ball and starting attacks from the back.

Finally, to the attack on Monday and the Walker-McCallum partnership again working wonders as they both got amongst the goals once again. Walker, along with Myles Weston, got in behind that Bees back line time and again and looked a constant threat. Paul McCallum was once again superb as well, holding the ball up for the two players just mentioned and when his opportunity to strike at goal came – he took it fantastically.

Other notable observations from Monday’s display was Ling’s performance in the middle of the park, coming on for Joey Jones, he slotted in really well there and won his battles in the midfield; while also completing some great balls up to the attackers when he won it higher up the field.

Below are the player ratings for the second game of the weekend, as voted for by supporters: 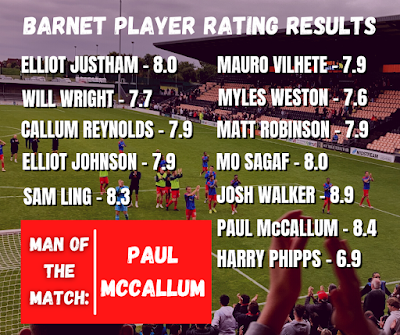 Well, that's my take on how we maintained top spot and I hope to be writing of similar performances in the days to come as Wealdstone are the visitors to Victoria Road. I expect another three points from them to keep our 100% record in-tact; my confidence in this team is sky-high as I'm sure yours is.
So let's hope McMahon and his team can keep this going, but until next time, thanks for reading,
Keane