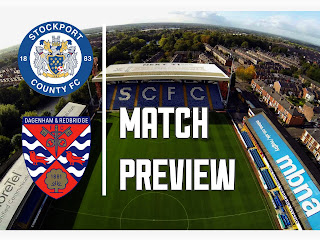 The new season: here at last!

Away days have returned; hopefully too will the good times to Victoria Road - expectations high for McMahon’s men.

Up first is a side who themselves are tipped for a great shot at promotion as Stockport host the Daggers at Edgeley Park.

I’ll preview the clash along with Stockport fan Nick from The Scarf Bergara Wore, Stockport County Podcast (@CountyPodcast) - from all angles.

The Daggers go into this one with expectation, but as Daryl McMahon said, still very much as ‘the underdogs’. With an opening day clash there is that desperation and pressure to get off to a good start; the performance setting the tone for the rest of the season.

However, there is also that excitement and buzz I’m sure everyone is feeling reading this now - to see the team back in action - fingers crossed they put on a display reminiscent of the back end of last season.

This task has hopefully been made easier by the business done this summer; the focus on retaining players. Our core group of players remain with us, the players key to our resurgence.

Though we are content with our performance in the transfer market, Stockport have outdone themselves, superb signings left, right and centre. Their attack headed up by the likes of Madden and Quigley alongside other impressive loanees; as well as existing players such as Rooney.

They will be a tough nut to crack, but returning to the side who will hopefully slice open the hosts’ defence. This is the team I would put out to face the Hatters today: 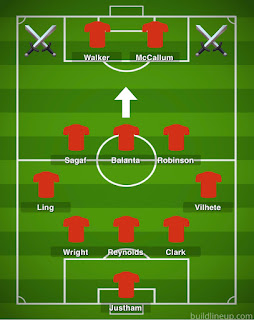 It may appear bold with the 3-5-2 (3-4-1-2) formation but I feel we’ve nothing to lose going into this one as the underdogs. A similar attitude as to the back end of last season could see us get off to the perfect start - or otherwise - in which case at least we went out there to win and not hold out for a point.

Where do you see Stockport challenging this season?

No excuses for us this season, we’ve got to be going for the title. We weren’t too far off last year, and the investment both on and off the pitch in the last 18 months has all been building up to this season. For what it’s worth, I think we’ll be top 3. If management and players can learn from the mistakes of last season, we’ll be a force to be reckoned with.

What is your preferred Stockport XI?

For the first time in living memory, you could pick out two separate starting XIs from our squad and still be competitive. When Rusk took over in January he tried 4 at the back before soon reverting to a back 3, so it’ll be interesting to see how much we switch things up.

Who is the player(s) we should watch out for?

Throughout the side we’ve got players who’ve done it at a higher level. Will Fish (on loan from Man United) and Ben Barclay (turned down new deal at Accrington to join us) won’t have come here to sit on the bench, so they’ll most likely feature heavily in defence.

Despite dividing fan opinion, two-time NL Player of the Season John Rooney has the ability to change games in an instant, while Paddy Madden (reported 250k from Fleetwood) already looks like he’s been here for years. All that, and we’ve got Alex Reid who bagged 20 odd goals last season but will most likely warm the bench this season.

Honourable mention for Macauley Southam-Hales as well. He’s ridiculously fast. I’m not even kidding, it’s like he’s a cartoon or something.

What department are your team strongest in?

See above. We’ve got an embarrassment of riches available to us in terms of personnel, now it’s up to Rusk to get them playing. I’m aware this sounds Billy Big Bollocks but don’t worry,  we’re well aware that we’re not the only club in this position.

What department are your team weakest in?

I’d like a battering ram of a striker for when things aren’t going our way, but it’s impossible to be too critical of our dealings. Our squad last year was ridiculously bloated so it’s been nice to see some fringe players moved on.

Who are you most concerned about in the Daggers line-up?

You’ll get this answer a lot this season. Paul McCallum. Great pedigree. Big, strong and he can finish. One of the best strikers I’ve seen in our decade or so of non-league purgatory.

Where do you think Dagenham will end up this season?

Top 7 at least, although I’d have you as an outside shot for top 3 (I have a sneaky suspicion you’ll finish above Wrexham at least). I was impressed with you lot last season, and I reckon it might suit you to go under the radar a bit.

What score line do you predict?

Thanks for reading and hopefully you’re now in the mood for the new season to commence with this tough test,