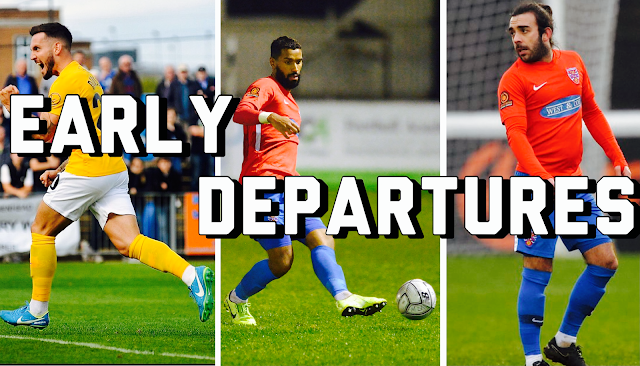 Well, we’ve all been eagerly anticipating the retained list announcement; though it is yet to come – we have some early news!

To all the fans and players @Dag_RedFC, the past 2 seasons have been a pleasure! Special thank you to the people in charge for giving me the opportunity to enjoy the game again.. Wishing you a successful future ✌🏽❤️ #LC5 pic.twitter.com/Ckl7J46ynU

I begin with a centre back whose injury and McMahon's unfavourability (so it appears) towards him has seen him leave the club upon the expiry of his contract. Croll amassed 51 appearances during his time at the Daggers, adding to his 40 Football League appearances for Exeter, which saw him as an attractive player with EFL experience when we first signed him.

The departure of Croll is no doubt the one that brought the highest level of surprise, albeit he's been out of favour, and without doubt the highest level of disappointment. Dubbed 'Mr. Reliable' by myself, Luke barely put a foot wrong in a Daggers shirt, shoring up a back line when it looked shaky at times - single-handedly pulling it together.

Moreover, as you can see in his highlights reel above, he was a great ball-playing defender with brilliant composure - adding another dimension to the side - playing out from the back.

This calm and collected approach was reminiscent of Manny Onariase, whom I feel we still need to replace, leading me onto my next point - we are over-subscribed in that position, yet still need to improve it.

Therefore, these tough decisions have had to be made, and Kenny Clark appears to have been favoured over Luke Croll to free up space and perhaps wages - for an incoming Centre Half.

The Centre half I want to see is an imposing one, whom we can describe as our rock, a type of player even with Croll in the squad - I believe we never had.

To conclude, I was disappointed to see Croll depart, but understand the decision and see his departure as an early indicator that McMahon is having a bigger clear out than we first thought.

Would like to thank everyone involved with @Dag_RedFC for my time at the club, best of luck to the club in the future, if you could just send me my goal of the season trophy I would really appreciate it 👍 😂😂

So, now to the second most surprising/disappointing of the three, in my view and indeed the fanbase's I feel - our views seemingly aligned. There is no denying that Deering is a great talent and there is evidence for all to see in the technique in the goals against Maidenhead and Chesterfield (below) - the goals of the season he references in the above tweet.

All the best Sam will never forget the beauty against Chesterfield pic.twitter.com/3KphOawqkP

However for all the talent, there was the potential for Sam to be hit and miss and go missing in certain games - perhaps not consistent enough for the promotion push next campaign? I'm just putting that out there, but the reasoning behind his departure I feel makes more sense is that similar to Croll - the position is oversubscribed.

The others in this position more suited to Daryl McMahon's style of play, I'd suggest, and have proven consistently in basking form - they can be trusted to deliver. I cite new additions like the versatile Vilhete and Sagaf, as well as the ever-impressive Angelo Balanta.

Ultimately, therefore, I feel that it's a similar story of favourability with Deering (his notable omission from the squad recently evidence of that) as well as being squeezed out of the squad by others.

So, a less-disputed departure, with a general consensus others in his area of the pitch are more suited to taking the Daggers to the next level next campaign.

My time at @Dag_RedFC ends this month! Personally not the way I wanted the past two years to have gone but that’s football for you. Just want to thank everyone connected with the club & have some good memories! All the best 👊🏽⚔️🔴 pic.twitter.com/771Y9xiJtr

Finally, to what appeared a foregone conclusion, Dobson's departure was the first to be announced by the player himself, having spent the season out on loan at Ebbsfleet. Albeit, the attacker was not anywhere near the manager's plans last season, hence the move out on loan - he did have some great moments in a Daggers shirt.

Most notably for me is when he grabbed the headlines against Sutton, 'Dobson Is The Dagger' my report was entitled, after he scored the crucial second in a 2-0 Dagenham victory at Gander Green Lane - on the stroke of half-time.

He scored 2 goals in his 22 appearances with loan spells at Hemel Hempstead and Ebbsfleet during Daryl's tenure - clearly not favoured - just running down his contract.

So, they are the early departures, whether we see some more before the official retained list announcement remains to be seen - that official word the one we're all waiting for!