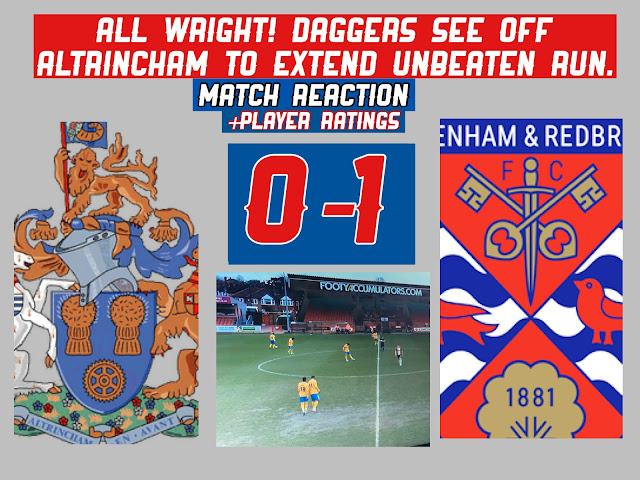 Good performance, not the best, but good enough for three points which were desperately needed points for the Daggers – continuing their bid to push up the table. A win which came after last-minute heartbreak on Tuesday and the Dagenham goal then was a wonder goal – Will Wright wanted a slice of that action.

That’s exactly why he tried his luck from 25 yards with a free-kick and beat the man between the sticks - providing the winning goal for his side. A wonderful strike which luckily, on this occasion, wasn’t cancelled out at the death!

Going into this one there was little to split the two sides really, as the league position didn’t tell the full story, the Robins having played 3 more games than McMahon’s side. But they did, nonetheless, sit 13th and 4 points clear of Dagenham with 38 points on the board.

Their season had gone very much in a downwards trend in recent times, their form a far-cry from what it was back when they defeated Dagenham in the return fixture back in early December.

Moving away from the head-to-head aspect, it was crucial for Dagenham to not only extend their unbeaten run but to do it by securing three points. Not only because of the loss of two points on Tuesday but looking in the other direction, the fixtures they have coming up – they needed a victory on Saturday.

Despite being cleared to play, the East London side were still feeling the impacts of COVID, leaving a bare 16 players for McMahon to choose from when selecting his side – little choice at all. A debut was handed out to Saidou Khan and he was later replaced by another new recruit – Mauro Vilhete – whom fans were able to get a good look at. 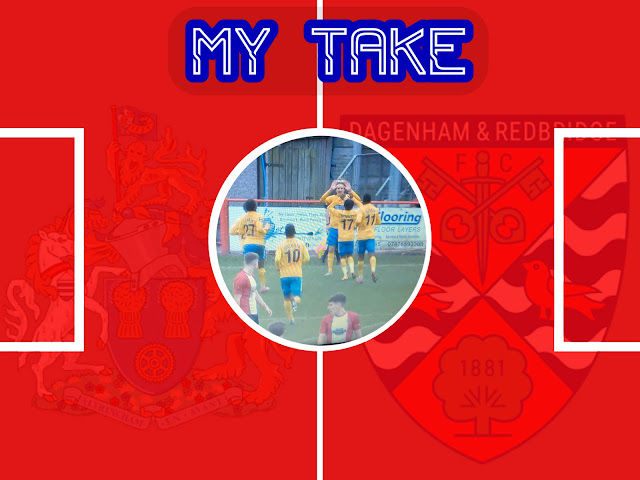 So, the visitors, in yellow and blue (oddly) – looking more like Mansfield Town – got the game underway! Taking control were the Daggers, at the J. Davidson Stadium in Altrincham, Myles Weston proving too hot to handle in the early stages.

However, for all the pressure, there was little substance and even this early on; the away supporters (myself included) were growing concerned it’d be a repeat of results such as the Weymouth one.

Our concern came close to becoming reality on sixteen minutes as Kenny Clark was forced to head the ball off the line – alert enough to avert an early Alty lead was the number 6!

Up the other end of the pitch, the yellows came close to an opener as Scott Wilson found space in the box, but this effort was deflected wide! A perfect opportunity and I thought I knew which way this game was going to go; dominant yet wasteful and it would prove costly – that was my hypothesis.

However, the Daggers were to see out the 20 minutes until half-time, in a 20 minutes that very much mirrored that of the 25 prior. The Daggers began this stint though, under pressure, with balls flying into their box from consecutive set-pieces – but they were defended well.

Continuing to cause havoc was Myles Weston, hence why I refer to this as a reflection of what had gone before. There was a similar ending in how we hit our efforts wide of the mark too, a difference though, was Weston was beginning to take matters into his own hands.

The winger went more direct in his pursuit of a goal, cutting inside, but the ‘same old Dagenham’ of this season was to out and the final third was where our attacks broke down.

Nevertheless, our possession in and around the box caused the Robins defence some concern and it was concern enough for them to commit successive fouls on the edge of the box. It was Mo Sagaf who won the first, but somebody who had been very much present in the last 40 minutes – Weston, was to lift it over the bar.

Another free-kick was to follow in the last action of the half and although it came close it wasn’t close enough as the Wright effort went inches wide of the mark. After the first half, here were my thoughts at the break: 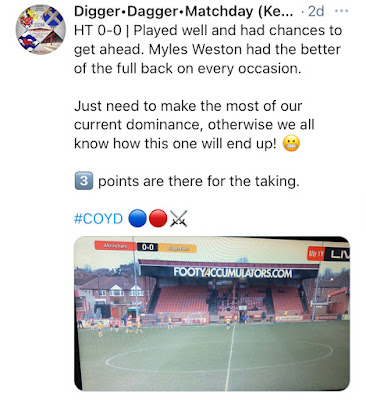 Into the second half, and it was a much more tightly contested 45 minutes as the Daggers struggled early on due to the home side almost making Weston, the main outlet, redundant out wide – closing him down.

Therefore, the Irishman in the away dugout opted for a change in tack and six minutes into the half introduced Mauro Vilhete. This pleased me as it was a chance to see what he could do in a Daggers shirt given forty minutes to prove his worth.

The next ten minutes saw another six-hundred seconds of half-chances up either end and the game there for the taking – I grew concerned we’d throw away a glorious opportunity for three points. So too was the midfield maestro, Angelo Balanta, as he began to get onto the ball as the half progressed – dangerous for the opposition.

The Colombian took aim at goal on the sixty minute mark, on the half-volley, but it wasn’t to trouble Thompson in the Altrincham goal. That chance coming from a Liam Gordon cross, the Daggers were now as a collective moving back up the pitch.

However, there was still no goal so McMahon had another role of the dice and brought on Adrian Clifton in place of Sagaf whom put in a good shift - without pulling up any trees.

Another ten minutes had flown by and the prospects of a draw became increasingly likely, frustration creeping in, Daggers captain Dean Rance was to enter the book. To try and find that allusive winner the Daggers kept probing and the key was – patience – cries of ‘settle’ and ‘calm down’ came from the men in yellow and blue.

The final opportunity to influence from the sidelines, the lightning-fast McQueen was introduced, and he made an almost instant impact. Within two minutes of crossing the white-ruled line, he won a free-kick in a dangerous area – Myles Weston and Will Wright standing over it. 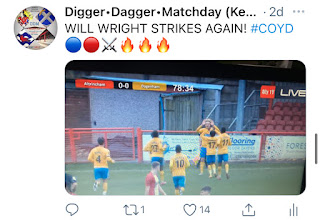 The former ran over the ball, before the latter struck it with such precision that the net was to bulge moments later… Will Wright struck again! The match needed a moment of brilliance to win it, as how else could it have been one? There was little, if any, goal-mouth action for the best part of 80 minutes!

The only job for the visitors now was to see it out… which you’d assume is simple, but as I and every Dagger knew all too well – you can’t exactly trust this side when it comes to that! However, this time they looked to be getting it right, keeping the ball, with some lovely exchanges between Balanta and Vilhete in the midfield – even looking for an opening for a second.

An experienced and professional end to the game from the Daggers it was, thankfully! As McMahon’s men had secured a victory in Altrincham – the referee signalling full-time.

I still have my doubts over whether we’re hitting the target enough or are able to go on a WINNING run – of the length so that we can make the play-offs. On that I’m not confident, but I’ll have another post out shortly on the direction the club is taking.

Back to the overview of the match, and it was a solid performance that needed that moment and Will Wright gave us just that with a delightful set-piece. The individual performances and YOUR Man of The Match I’ll move to now! 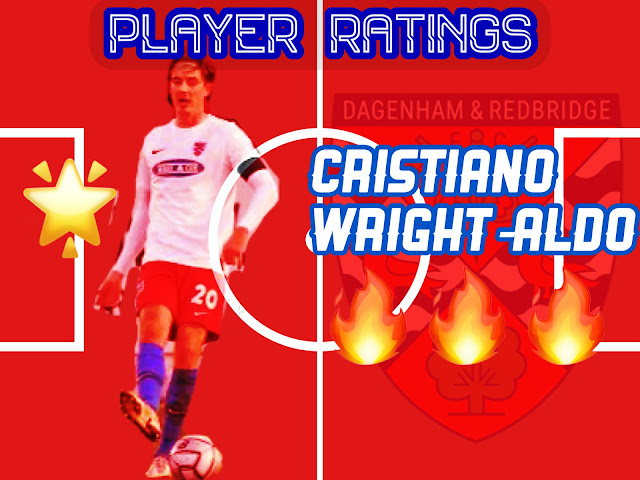 I have been a critic of Clark as he had made a series of mistakes, co-incidentally while wearing the Captain’s armband, but since then I feel he has been very much a different play – for the better. A crucial goal-line clearance on Saturday and a great job in shoring up that back-line.

A vital goal at a vital moment and that individual moment of quality is what this game needed – he delivered.

Despite not being involved in a goal, Myles posed a threat for large spells and continued to be a great, attacking outlet for the Daggers.

In particular, his second half performance Balanta took it upon himself to get onto the ball and get the team driving forward, his link-up play was brilliant. His use of experience was key too, towards the end.

Put in a great shift when he came on and lifted the team, a breath of fresh air and excited to see how he progresses in a Daggers shirt.