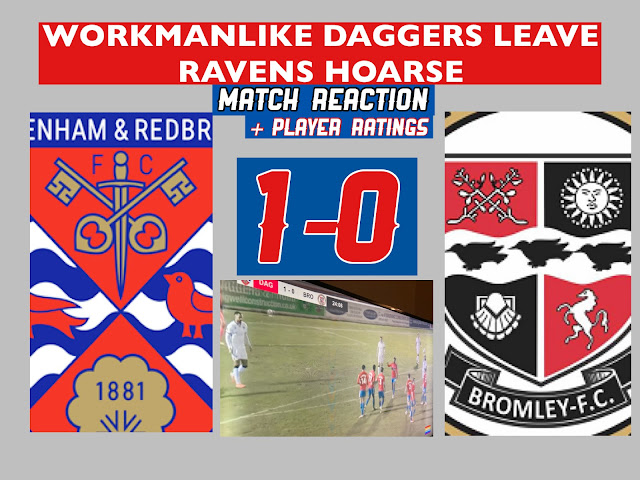 A solid, workmanlike performance saw the Daggers defeat fellow London side Bromley in a game where McMahon’s men had no stand-out performers. This fact, only testament to the togetherness and spirit of the hard-working Dagenham side who saw out a 1-0 win following a 25th minute Liam Gordon breakthrough. Well, following the postponement of the Hartlepool fixture at such late notice on Saturday – the Daggers had more time to prepare for Tuesday’s fixture – as they played host to the Ravens.

That extra time to prepare was much-needed by all accounts, this, following the embarrassment of a defeat to Notts County. A defeat that owners, supporters and the under-fire manager demanded a response from.

I felt this imperative to put in a wholly-improved display would see a positive result, but by the same token, I knew all too well what a good outfit Bromley were. Their form dipping since the start of the season but nonetheless – they provided a threat on their day.

The team McMahon was to put out again ‘intrigued’ many and disappointed some with just three recognised attacking players in the XI – five in the entire matchday squad. A notable omission was a certain Paul McCallum, though surprising on paper, in the context of recent performances – few fans took issue.

Though, what did please fans was the inclusion of Wilson and local lad Saunders; Liam Gordon in the starting line-up also pleased supporters. What concerned me was the midfield three of Adams, Rance and Robinson; though I take no issue with the players individually – they struck me as all too similar. Therefore, little attacking outlet being provided in transition.

Aside from tactics and team selection, the Daggers were also sporting rainbow flags on their sleeves in solidarity with the LGBTQ+ community. A gesture which is to continue until the end of the season – starting now, in LGBT history month. 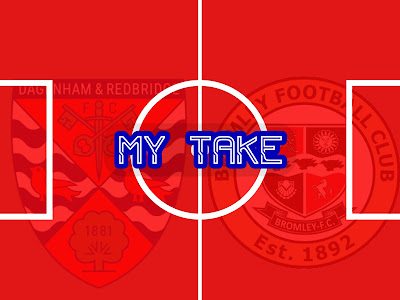 No late postponements, the game kicked off at 7:00pm as expected, and as us fans also expected – there was an instant, visible change in attitude. From the outset, Dagenham looked to be challenging for every ball and not allowing Bromley sight of goal early on – or even spells of possession for that matter.

The architects of the attempts, which were Dagenham’s, in the first 15 minutes – were Weston and Saunders (the latter given an almost free roam role). However, there were no clear threats to goal early on, despite the best efforts to work the ball inward to the likes of Wilson.

More direct attempts at goal followed, from the midfield, Robinson looking to drive forward and slot the attackers in; Dean Rance going it alone – his shot blocked. Daggers supporters, myself especially, were not too bothered we couldn’t find the target early on – just delighted that the Daggers were in firm control in the opening stages.

This, considering that the hosts had conceded within the first twenty minutes in three out of the last four games! Here, the Ravens hadn’t had a sniff at goal; nor advancement into the final third.

The pressure continued to mount on the Bromley back-line, and finally, the net bulged! Liam Gordon was the one to turn it in, his first goal since his return to the club. For once, it was Dagenham who were on top early on and took the lead – a theme we were all too used to was the opposite – the Daggers only beginning to play after we’d gone behind.

The hosts led and looked to bolster their lead in the five minutes that followed; George Saunders proving a handful for the Ravens defence. But Dagenham unable to grab a second whilst on top, the visitors upped the ante and began to apply pressure for the next 15 minutes.

Free-kicks and set-pieces conceded by the home side’s defenders, which had so often led to goals this season, I thought it was only a matter of time before Justham was beaten. This disbelief in us defending corners was justified, though I was pleasantly surprised to be disproven.

So as aforementioned, rash challenges in possibly dangerous areas from the likes of Clark and Reynolds, put their side on the back foot – one such instance almost saw Kizzi tap the ball in at the back post.

I’m often quick to criticise our defenders, and justifiably at times, but to their credit in this period – they were what they hadn’t been for some time – dominant in the air. This aerial dominance helped the Daggers hold out until half-time, leading 1-0 – below were my thoughts at the break. 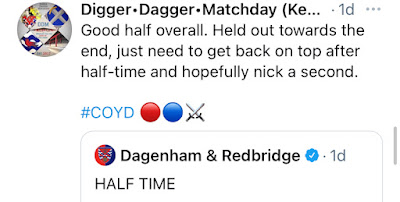 So, the need was very much there for the leaders to take back control of the match, but there was no real dominance in this second half – both sides throwing caution to the wind.

Justham was tested by one of a few former Daggers in a white shirt, Michael Cheek, and ex-Dagenham keeper Mark Cousins also denied Charlee Adams, up the other end, from doubling the hosts’ lead.

In the next ten minutes, Bromley were to have their biggest push for an equaliser; introducing two new faces in Luke Coulson and Billy Bingham, the latter gracing the turf of Victoria Road he impressed on – in his time in red and blue.

Duffus, though, was to be the one who threatened the hosts’ lead the most – forcing Elliot Justham to get down to his near post. The instrumental Saunders was again, so close to orchestrating a move that would put the game beyond doubt – taking the ball from the feet of the defender – Wilson though, couldn’t beat Cousins to the ball the number 14 whipped in.

The win edging closer, the ever-composed Matt Robinson looked to dictate the game from his midfield role, playing it out wide to the flanks. Also, trying his luck from the edge of the box – looking to make it 3 goals in 3 – having scored just once prior to last week in his 140 odd games at the club.

Daryl McMahon made a couple of changes as the clock ticked down, supporters at home no doubt applauding those who were replaced – Saunders and Wilson – for their relentless running up front.

One of the substitutes, Darren McQueen, looked to do what not even those two managed to do – score and seal the victory. Although, he too, was denied by ‘keeper Mark Cousins.

But, that wasn’t where Bromley wanted the ball, unable to create anything in the other box – the referee signalled full-time.

Signalling the end of a workmanlike Daggers display which left Bromley with little room to play. For the first time in a while, I felt comfortable watching Dagenham, with few scares from our defenders. We seemed to really take the game to the opposition and that was pleasing.

Although, it is imperative we back this victory up with another good performance – now, it’s unfortunate we have to wait another week. However, we have again, more time to prepare for the Sutton clash next Tuesday. 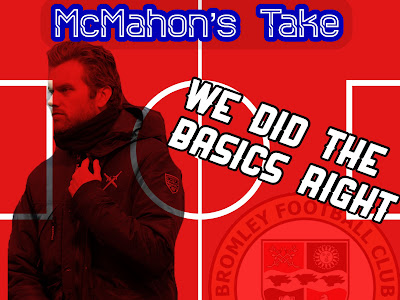 Daryl was in better spirits than previous interviews and rightly so, his players fighting for the badge and showing that ‘togetherness’ he has previously lauded. He praised that spirit yet again; while also praising certain individuals.

One in particular whom he stated was ‘the best player on the pitch’, was fan favourite Matt Robinson, receiving plaudits for his composure on the ball – especially in the second half. This would have also pleased supporters who felt Robinson had been disregarded in terms of Daryl’s team selection – but he got his opportunity to impress and hasn’t looked back since.

Finally, before we get to my player ratings, Wilson and Saunders were players the Irishman praised for their work ethic in particular. The latter, also seen as a promising talent in the eyes of McMahon, the free roam role also spoken of – the winger allowed to express himself.

A last point on the manager’s analysis, and he was pleased with the performance as it proved what he’d been saying – you do the basics right and you can win games in this division. 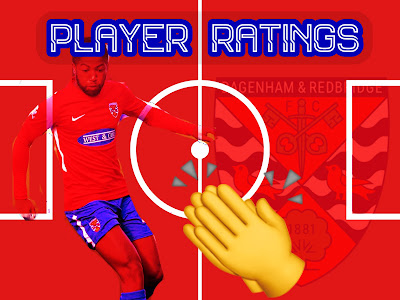 I write this description of Clark’s performance, but it is true for the whole back line, whom often come under fire. On this occasion they were solid and dominant in the air – as centre backs must be – especially at this level.

Was key in our threat going forward and also in the move which led to Gordon’s goal.

Another steady display from the man in the middle, whose performances have previously gone unnoticed. His temptation to press forward now has really brought his quality to the fore.

His praises were yet again sung as George is just such a handful for the opposition defence – also, he makes things happen.

Tireless and relentless in his running up top and this defending from the front was pivotal in the ‘togetherness’ of the performance. A Man of the Match worthy display.