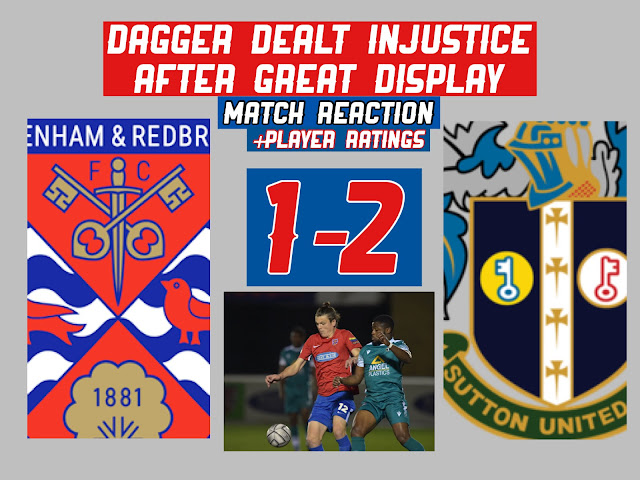 Unjust and harsh. Now some, on reflection of conceding from a last-minute penalty that led to a bitter 2-1 defeat, will say – that’s football. Indeed, after venting his frustration at the officials at full-time, goal scorer Liam Gordon took this view. Now, this is no nice way to lose, but the 2nd placed side in the division leaving you devastated and robbed of a point and even being gutted you didn’t win – that says a lot about your team’s performance.

Tuesday’s game seemed a continuation of the performance put in seven days prior; the Starting XI mirrored that of the one from last week which helped too – we’ll get onto this. But in a nutshell, the two great performances put in over the last two games have been encouraging… long may it continue and results will soon follow. 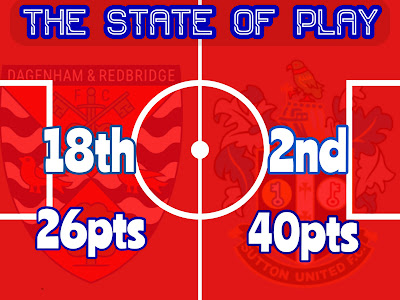 The Daggers were certainly the underdogs going into this one, but the 12 place gap in the league table didn’t limit expectations of McMahon’s side. Particularly due to the previous clashes we have had at Gander Green Lane already this season; the reverse fixture in the league ending all square.

However, as I say, we were underdogs as the 14 point gap stood with Sutton high-flying and breathing down the neck of league leaders Torquay United. The Daggers looking to get back to continuing winning ways and hit some form after hitting rock bottom two weeks earlier in Nottingham; bouncing back against Bromley.

One factor that has changed since that Notts County humbling, is a consistent starting line-up in the first time since… I can’t remember! The tweet read: unchanged XI (my reaction was simple a shocked face).

Though there were changes on the bench, including Paul McCallum, Joey Jones (fighting back fit from injury) and new signing Mo Sagaf. Notable omissions did include one of the best players of the first half of the season in my view, Luke Croll, and Andrew Eleftheriou. 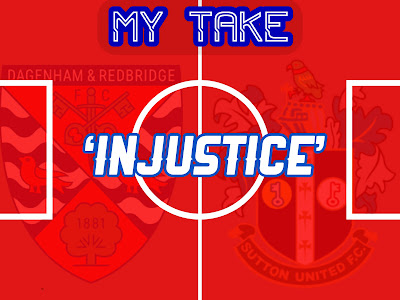 After another full week of preparation, the Daggers were back under the lights at Victoria Road, facing off against old foes – Sutton United. The U’s in fine form with back-to-back wins going into this one, though in spite of their flying form they weren’t the quickest out of the blocks.

The hosts creating three quick chances; almost going one goal up within a minute! These included Matt Robinson heading over the bar and George Saunders looking to get the breakthrough – just stabbing wide.

Then, Weston was keen to recreate the goal from a week ago, this time Liam Gordon not meeting it at the back post. But, that was to be the extent of Dagenham’s early domination as the U’s grew into the game – Milsom the man who looked to lead the push for an opener.

First, his effort from a set-piece, just wide of the mark – then, a tame effort on target. Not too threatening, but they were getting in and around the box as they looked to control the game.

Soon, they would be in control and in front, after consultation with the linesman – the referee pointing to the spot. Now, we can’t tell whether it was inside or outside the box, but it did seem to be a foul committed by Reynolds regardless.

It’s always dangerous to be too rash when defending around the box, and you’d have hoped we’d learnt that this session, but evidently not! Harry Beautyman was to be the one to convert from the spot and give his team an underserved lead; only on top for a mere 5 minutes out of 25.

An instant reply was fought for, the Daggers winning a corner, but Weston was only to find the hands of Bouzanis – whom occupied the Sutton goal. It was to be a test for the other keeper moments later, Elliot Justham passing with flying colours, diving to save his side on two occasions. The latter, a deflection which required remarkable reactions; showing why he still remains one of the best keepers in the league.

Frustrations grew for the home side who found themselves behind as they dominated right up until half time ever since the goal – which came about after an error. Moreover, at a time where Sutton had their only five-minute spell of dominance.

Great football was being played by McMahon’s side, but two efforts were all they could come up with – Weston and Saunders though, not troubling Bouzanis. Myles Weston looked to catch the ‘keeper out from a free-kick but he was equal to it.

Despite no breakthrough in terms of a goal, on the brink of half time the Daggers should have been given a one-man advantage. This, following ex-Dagger Goodliffe’s late challenge on Matt Robinson – the ball was there to be won and Robinson got their first – the Sutton defender not pulling out of the challenge.

However, it remained 11v11, as the referee only brandished a yellow car and his next action was to signal for half time. There was definitely life in the game for Dagenham to go and get a goal, or even two, in this second half – a pleasing performance with an underlying sense of frustration.

The pleasing performance meant that McMahon’s decision to change things at the break surprised a few: two subs were made with Wilson and Adams making way for McCallum and Deering.

It was a fairly open first 15 minutes of the second half, free-flowing, but little in the way of clear-cut chances. That was until a moment of joyful déjà vu for the hosts, Dagenham & Redbridge and Liam Gordon had found an equaliser.

Again, a great ball out wide by the influential Matt Robinson found Weston, the latter seeing his cross met by Gordon. A recreation of the goal that clinched three points just seven days ago – Gordon now had 2 goals in 2!

It seemed a well-deserved goal, that was for the move alone, but more than deserved in the context of the performance up to that point. Now, the mission for Dagenham was to keep up this performance and keep the momentum – then, just see where it takes them.

They were to keep the pressure up for the next few minutes and fashion another chance through Myles Weston, though his low-driven cross this time saw no response. Another low-driven attempt was made by in-form Matt Robinson – eyeing the goal – though he was to narrowly miss the target!

With the 75 minute mark on the horizon, Daryl took one last throw of the dice, bringing on the pacey Darren McQueen in place of George Saunders. New personnel introduced, but Matt Robinson remained the one firing attempts at goal, his effort just going over.

However, the threat was still there for the Daggers to fend off, Ajiboye was to be the player trying his luck for the U’s – his effort flew over. However, as the game neared completion and both sides looked to settle the score in their favour, Ajiboye got lucky on his second attempt.

His fantastic run on the break saw him beat two Dagenham men in a foot race out on the wing, making his way into the box, eventually being brought down. On reflection, no doubt Massey-Ellis would have reached a rather different conclusion; Ajiboye had released the ball two seconds prior to Reynolds’ challenge on the attacker.

However, the penalty had been given in the final minute and (again) Harry Beautyman made no mistake in converting from the spot. Delight and deflation on the Victoria Road turf; the Daggers robbed on their home turf.

It wasn’t more than a minute before the referee signalled full-time, though it seemed that whistle meant ‘gather round me’ – at the game’s end. Gordon was to lead Dagenham’s protestations at the decision which decided the result – booked for his troubles.

Though he was right to be annoyed, his goal rendered useless in terms of the result as the Daggers failed to take a point in the end – from second placed Sutton. That previous sentence says it all really, and shows how well the Daggers played.

There were some reasons people gave for the defeat which were critical: ‘we should have taken our chances’; ‘we can’t be gifting goals’ and so forth. But that defeat was undeserved and although we took nothing in terms of points from the game, we should take the positives and confidence.

We have now played to the standard we’d expect to be playing at for a play-off push; if we keep the level of performance (a big if) – I don’t see why we can’t run it close with the top 7. 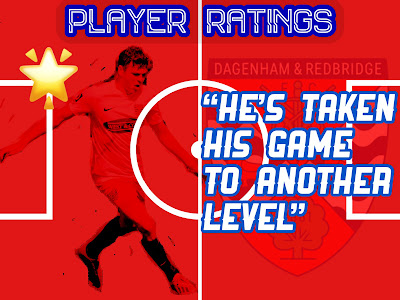 In individual moments, Reynolds has seen his score slip. Giving away two penalties (whether they were or not - aside). He has to get the lowest rating.

He has taken his game to another level recently. Yet another MOTM display!

Deering - 8 He was again effective and impactful when he came off the bench – making things happen and regaining possession.