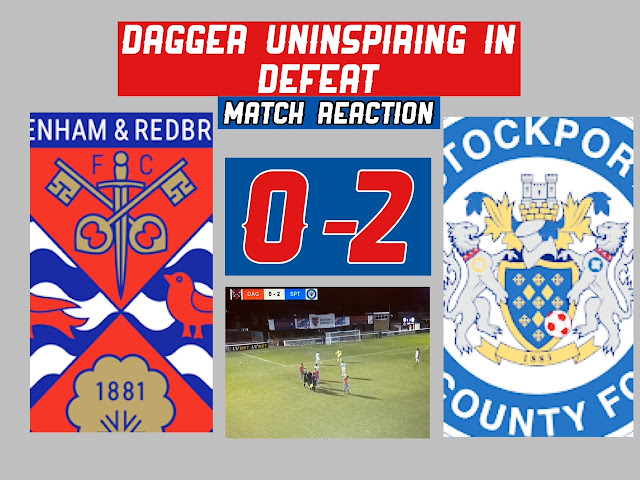 Uninspiring. I often struggle to find a solitary word to sum up a performance, however, following the 0-2 home defeat to Stockport – I find this word synonymous of Tuesday’s encounter. The floodlights, seemed to be the only thing the Daggers owned that were shining bright, on a night where the standard of football left many fans with a rather dim view of play-off hopes.

The Daggers now five points off the play-offs, though the level of performance leaves many with the belief things can’t improve as much as they have to in five months – for us, to achieve a top 7 spot.

This is putting off-field financial matters aside, the future of the season remaining in the balance.

Finally. A return to league action, the opponents were Jim Gannon’s Stockport, who were fresh from back-to-back cup contests - the first saw them narrowly defeated by West Ham in the FA Cup.

The second, another defeat against Notts County on Saturday, so the Hatters match sharp or fatigued? We would see how that was to play out under the lights at Victoria Road - the Daggers though, with one aim, determined to continue their climb up the table. Looking to bounce back from an uninspiring FA Trophy defeat following the end of their isolation period.

It would have been a fantastic three points if they were to have pulled it off, many tipping County to return to the football league, most recently Paul Scholes on BT Sport. The Daggers manager himself also stated in his post-match interview; he believes Gannon has ‘the best squad in the division’.

But then again, the Irishman made it clear his side ‘want to get back to winning ways’, and as I believe, we want to be challenging at the top – therefore, we should be getting something out of games like this. That’s if we are to match the ambition.

I thought it was a tough ask to defeat Stockport on Tuesday, as I mentioned in the build-up, but I could draw some parallels from the run up to this game and the Torquay fixture.

An expected defeat; the fans wanted a reaction and the team to bounce back. But, then of course, we were without some key players as McMahon alluded to also – in Weston and of course Abu Ogogo. Although there is hope for a Joey Jones return against the Hatters and exciting news of Liam Gordon’s contract extension just before kick-off! 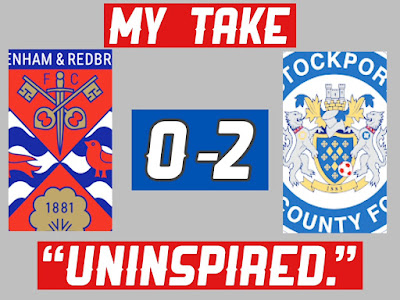 Well, as I say, uninspiring. But, there are of course reasons behind such an assessment – or, rather the absence of reasons to praise the Daggers’ display.

The first half was not too disheartening, the Daggers growing into the game as it wore on – a few half-chances created. Nothing too clear cut. Although, there were some good pieces of play which won a set-piece or two; rattling the Stockport back line.

But, this didn’t go without risk at the other end, both sides throwing caution to the wind – both going with back threes – toe-to-toe. Though we played with wing-backs, it was Joey Jones who seemed to be the driving creating force from the back – overlapping the wing backs himself. Jones put some great balls over the top and into the box.

Another man who had been on the side-lines, and too, looked productive in the first half was midfielder – Matt Robinson. Looking to make his stake for the vacancy in that midfield role following the departure of Abu Ogogo; which left a void in that area of the pitch. As well as his passing, Robinson earned praise from supporters (a rare occurrence following the Tuesday night defeat) for his fight, desire and tackling.

Not quite the reaction Brundle received for his return to action; though, there was a belief among supporters at the break that we had a foothold in the game – able to get something out of it.

That was at least, among those who weren’t so eagle-eyed to witness Joey Jones clutch his hamstring, an injury he’d supposedly just recovered from. A HUGE blow. The Daggers forced into a change, one certainly forced and would not have been taken otherwise!

Anyway, the scores were still level, so the game remained all to play for. But, the visitors didn’t take long to break the defences of Dagenham (which included the newly introduced Johnson) - it was Bennett who found the breakthrough.

Though, it was Elliot Justham who was to take the brunt of the criticism; seemingly parrying the powerful Rooney strike into the goal-scorers path, for a tap in. My reaction to the goal can be seen in the tweet below: 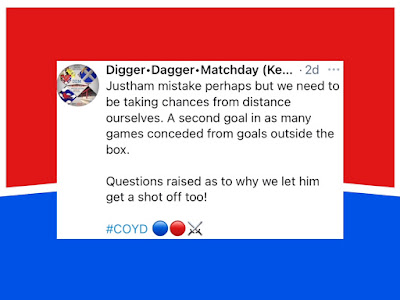 From there on in, that word ‘uninspiring’ was to ring true of the performance of the hosts at Victoria Road. The lack of creativity was concerning: the likes of Balanta and Deering on the pitch – though, unable to supply that electric spark.

The final nail was to be put in the Daggers coffin, even at the early 62 minute mark, as Alex Reid did well to find the bottom corner from the edge of the box – on his return to the Victoria Road. A happy one at that.

With little else to mention from that point onwards, I’ll speak briefly to the reasons behind that aforementioned ‘lack of creativity’. Now, I’ve spoken about this previously, and it’s the utilisation of Paul McCallum – a player most effective with balls coming into the box. 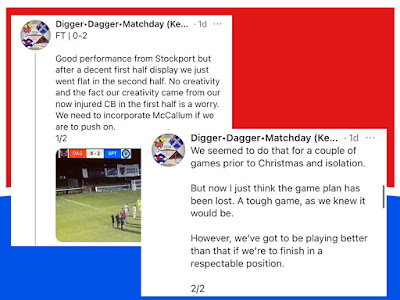 Therefore, when he isn’t getting the service, he is irrelevant to an extent – isolated – our most valuable player on paper is made redundant. So, I stand by McCallum, though people may criticise his playing style – he is a proven goal-scorer who isn’t being played in the right way. Or, at least the players around him aren’t giving him the ball in the air. 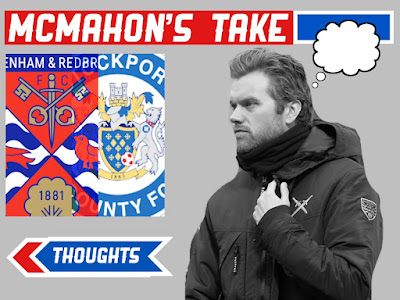 An ‘alternative’ view came from Daryl, who was interviewed the morning after the defeat, claiming it was a ‘good’ performance on the whole – 15 minutes again leading us to ‘shoot ourselves in the foot’.

The idea we created some good chances, I’d have to refute, and I’m not often one to be negative. It seemed that he was reiterating points made after defeats at the very beginning of the season – not in context of Tuesday’s game. As some pointed out, if that’s a good performance – that’s a cause for concern. ‘

Though, I do agree that this squad – though they weren’t performing at their best – is the best in the division at Edgeley Park. Furthermore, that this was our first league game back after a while, not excuses – more reasoning.

I disagree therefore, in the majority, but not in the entirety of Daryl’s comments. I also would point out that this was our 15th game of the season – the time of the calendar year throwing some people – ‘we still have 29 games’. The latter phrase, McMahon mentioned, we still have time to turn it around and play-offs are only five points away. 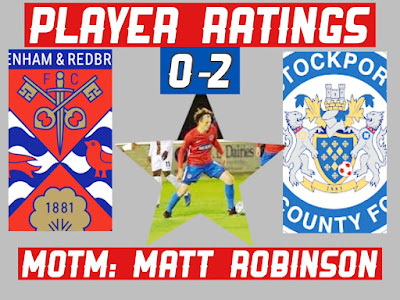 My Player Ratings can be found below:

Now, I put this rating with great regret - I am a huge fan of Justham. But, it was his mistake for the opener and the unfortunate thing of making a mistake as a goalkeeper is - it is very costly!

His first half performance a refreshing change to the balance of the side. Though, his injury that could put him out for another few games is extremely disappointing - a quality player.

On his return to the side, he didn't have a fantastic performance. But, it was up there with the best in the side on a disappointing night - definitely staking his claim for another start on Saturday.

So, the future of the season uncertain, I thought I’d give some football reading for you – just while we still can! There remains hope for ‘Grants Not Loans’ (this issue putting the season’s continuation in the balance) but it is dwindling.

We’ll see the outcome, local MPs making sure Dagenham & Redbridge’s voice is heard – let’s see what is to unfold!

For now, Stay Safe and COYD!