BACK TO WINNING WAYS AT WEYMOUTH 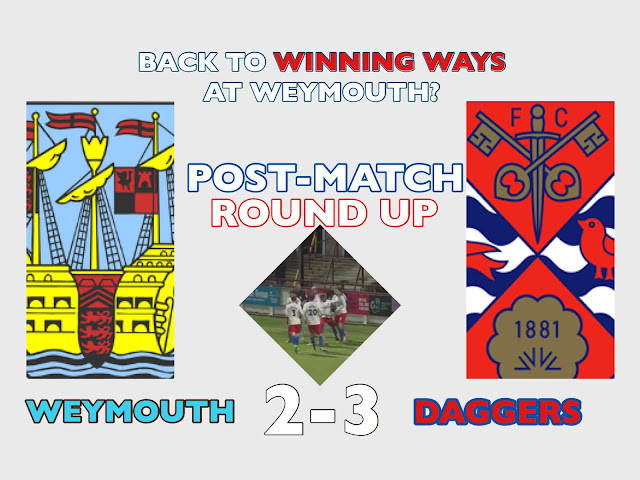 Relief. A feeling felt by many a Dagger as the final whistle blew on the south coast, yet that was mainly due to how hard McMahon’s men made it for themselves (and not least their nervous supporters) late on. A sight relief also felt, out of the context of the game and into the wider context of the season, as it was a win – in a match where it was imperative to pick up all three points and we did. 2-3!

That first goal went in early on and I thought that my headline from the weekend would ring true – ‘Here we go again?’ – ring true with a resounding answer of yes, here we go again. It was a slow start from Daryl’s boys in red, white and blue – no change there.

But, this is where I felt the players earnt respect and brough back faith within the fanbase, for now, not only did they turn it around throughout the course of the game – no, within minutes the game was turned on its head. It reassured me anyway that, Weymouth, tipped for relegation were not at the same level as us and we were rightly superior. Though the scoreline suggests it was a much closer contest.

Our simply abysmal away record from last season, if it were to have been reflected on Tuesday and if it is to carry on throughout this season – our flirting with relegation would undoubtably resume. But on Tuesday we didn’t buckle in that all too familiar Daggers fashion, and though the performance wasn’t polished – we got the job done – something we managed only twice last season. That being to manage a win on the road!

So, despite the late surge, it was too little too late for the ten men in claret and blue and the reaction of many was aligned with mine – the win is what matters – though we can delve into the performance. We posed a great attacking threat and we not only out-scored our opponents but did so with 3 goals on the scoresheet! This would debunk the idea that our attacking department is very weak, in part, as now we had scored three goals away from home for the first time in a very long time.

The pace at which we transitioned from defence to attack, was, with no exaggeration – a joy to behold. The goal that put us ahead, completing the turnaround, had a real scintillating build-up. Ultimately seeing Paul McCallum get his second of the season; latching onto Wright’s driven cross.

Despite the impressive offensive display, there are still errors being made and frailties at the back that, to use McMahon’s turn of phrase, ‘we need to iron out’. The opening goal saw Elliot Justham at fault, and the second another lapse in concentration. The truth is that the opposition faced on Tuesday were weaker, and though we won with 3 goals to 2, it’s unlikely we’ll be bagging 3 goals a game.

What’s more, it’s not commonplace that a side concedes two goals and goes on to win any game of football – against a better outfit than Weymouth, the Daggers would inevitably come unstuck. Though, that’s enough looking ahead to the future, and in further analysis of the match – a decisive moment in the encounter was the dismissal of Wakefield before the break.

This dampened the hosts spirits further after having their lead snatched from them within minutes; Terras totally stunned by a fast-paced series of events that saw them not only a goal down but a man down. They failed to come back from that, after conceding a penalty which Mitch Brundle was to convert for his second of the game – his individual performance and those of others we’ll get onto in the player ratings later. 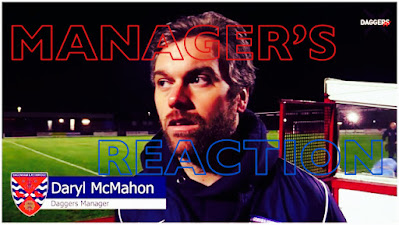 First, I wanted to just briefly assess McMahon’s post-match reaction which wasn’t as much of a spectacle as Saturday’s scathing take on a performance he labelled – ‘a disgrace’. It was more subdued by all accounts, the overriding feeling being that of cautious optimism looking ahead; Daryl saying that ‘we needed the win and we got it,’ but continuing to state how ‘we made it hard for ourselves’.

Playing down the performance further, the Irishman spoke of how, though ‘we controlled’ the second half – the ‘last ten minutes were sloppy’ – putting that down to complacency. Noting that in the ‘things we need to iron out’ column if we are to be a ‘serious side in this division’.

He did though praise the performance overall, especially the ‘fantastic’ second goal and on the quick turnaround – he spoke of how it was ‘one of quality and composure, what you want to see’.

Looking to the future, and a line that epitomised the tone of the interview, McMahon spoke of how ‘we are moulding into, hopefully, a good team,’ and that Tuesday’s victory was ‘a step forward’.

That ‘hopefully’ signalling his caution, and you could put a negative spin on that and claim he’s still uncertain of what he’ll get from his players – as the manager complained on Saturday. But, at the same time, and the more prominent view, is one of that – we are getting there – though admitting there’s room for improvement. I’d side with the latter argument.

This reading of room for improvement is evidenced by McMahon going on to say ‘we will be more professional’ as he wants to drill into his team this ruthlessness – claiming we were ‘too lax’ at 3-1. Highlighting there is no room for complacency.

He singled out, Mitch Brundle, who bagged a brace, and Darren McQueen, introduced to the starting XI, for praise to conclude the interview. 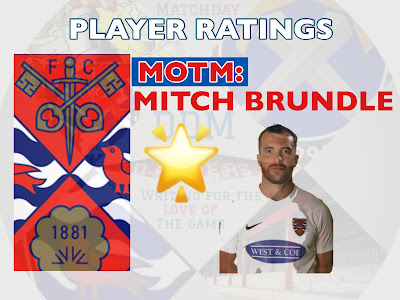 Here are the player ratings, and I’ve picked out certain performances for comment:

A mistake may see him as the lowest rated, but really, the average performance rating of 6 can be put down to Justham not being tested enough throughout the course of the game. His defence, all receiving 7s, on the whole were resolute and good in the air – bar those final ten minutes.

MOTM then, Mitch Brundle, bagging his brace and responding to critics of his by turning up on Tuesday night. He is, as almost every player at this level (partly why they’re at this level), inconsistent. But, throughout the course of the 90 minutes in Weymouth, he was competent, workmanlike and his quality going forward – he showcased perfectly. A great first goal to kick-start Dagenham’s rapid turnaround. McMahon noted how his midfield colleague Rance unleashed Brundle into a more advanced role where he shone.

He, like Weston, improved the performance on Saturday – coming into the starting XI – Rance had the same impact: a battler, hard-worker and good passer of the ball. Dean Rance is great with Ogogo doing the hard running in the middle of the park. The midfield 3 really did control their part of the pitch, before and after the Wakefield red card.

Myles has quickly become a favourite of mine, McMahon at the fans’ forum tipping him to be liked by the supporters - as he was at Ebbsfleet. His skill and ability down the wing saw him prove a constant threat again on Tuesday.

So, a positive result heading into the weekend, the supporters return in 2 days' time to Victoria Road as the Daggers look to make it back-to-back wins against Altrincham!