Showing posts from September, 2020
Show All

WHAT A SUMMER! WILL DAGGERS' SPENDING PAY OFF? 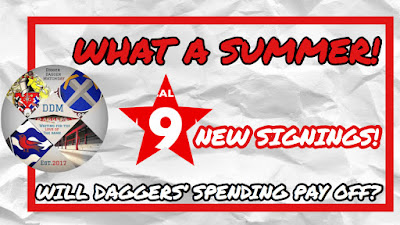 It has been a summer of recruitment from the Daggers, in a time of financial and health crisis, which has been THE most ambitious and promising yet. In a bid to return to the football league, our owners have backed the club with some statement signings in McCallum; some real promising rising stars in Saunders and McQueen; and a wealth of experience.  With the owners always focussed on a football league return and an extremely inadequate showing last season - the consortium are (in the words of Peter Freund speaking to Digger Dagger Matchday) 'more committed than ever'. So - Will this ambition and change of tact pay off? That's the question.   Callum Reynolds -  So me big shoes to feel, has the former Barnet man, after the departure of Manny Onariase at the end of last season – the Daggers CB partnership of Clark and Manny broken (or Clark, Manny & Croll in the back 3). However, at this level, and at Dagenham especially, we get used to football league standard players th
Post a Comment
Read more
More posts