Showing posts from July, 2019
Show All

The Daggers travelled to The Bridge, just a day after facing the young Hammers at home, to play The Urchins. The game got underway in overcast conditions contrary to the beautiful sunset on Friday, but The Daggers started on top. Their first real chance came just under five minutes in as Reece Grant couldn’t get a clean finish off with the keeper tipping the effort on to the post. A player who started the game the night before Andrew Eleftheriou was still fit and raring to go, getting back with a good burst of pace to cut an inviting ball out for a corner. However one player who looked rusty early on despite not playing against The Hammers was Strizovic; but after giving the ball away he made a solid save. Approaching the twenty minute mark Strizovic’s opposite number was picking the ball out the net, after a beautiful ball in from Eleftheriou, Luque rose high and netted with a bullet header.  The Daggers continued to assert their dominance winning consecutive corners with the
Post a Comment
Read more

Will Wood: 7/10 Age: 22 Position: Defender  Last season’s performance: Apps  Yel/Red   14.      3/1 My View: Wood joins The Daggers from League one outfit Accrington Stanley whom he featured 4 times for last campaign before joining Havant on loan. At the National League side Will - a left footed player - was in action for over 600 minutes when playing for The Hawks where he was red carded on one occasion. One issue with Will I believe is his lack of first team competitive action as last season was the former Saints man’s first in first team action previously competing in Premier League 2. As much as I respect the quality in this league is very high, I do feel that non league football is very different in terms of ability as well as physique therefore I am unsure on this signing. However, he has played in this league and am therefore rating him a 7/10 as Will is not yet to set this division alight but he is young and I see great potential.    Andrew Eleftheriou 8/10
Post a Comment
Read more

My first XI: A couple are interchangeable as will be discussed below Formation I have opted for a 4-2-1-3 formation as I feel it strike a good balance between attack and defence. With Odametey being used as a box to box midfielder with his levels of energy and determination.  Attack My attack consists of a front three of Luque, Quigley and McQueen in the ‘First XI’ however I feel this is interchangeable, Quigley and Grant should be interchanged based on form; likewise for McQueen and Kandi, who misses out. An anomalyhowever is Joan Luque whose form in pre season and record last season speaks volumes of his talent, therefore I feel if Dobson wants to break into the first team he may have to look at other positions - being versatile as he is.  MIDFIELD I have gone for a midfield three that includes a defensive midfielder (Brundle), box to box midfielder (Odametey) and an attacking midfielder (Balanta). I have put Brundle into my ‘First XI’ as a defensive midfielder because his passing ca
Post a Comment
Read more

On Saturday the new look Daggers, in  order to get in gear for a promotion push,  tested themselves against league one  opposition - Southend - at Victoria Road. Peter Taylor’s Dagenham side got the game underway and got it going in stereotypical non league style with  a few launches forward early on and no rhythm to their play. Newcomer Will Wood made his mark clamping an opposition midfielder on the halfway line much to the crowd’s annoyance however,  as he needlessly fouled giving an  advantage to the visitors. Many may say ‘it’s just a  friendly’ however Wright's solid challenge  stopping the attacker from advancing into the box disproved that mindset.  Despite liking the aggression Wood possessed it grew increasingly frustrating when he continued to foul - many deemed it laziness as we were just approaching the 10 minute mark. With eight minutes played Dagenham began to string some passes together as  former Cherry Quigley played a quality ball out wide to McQueen (
Post a Comment
Read more 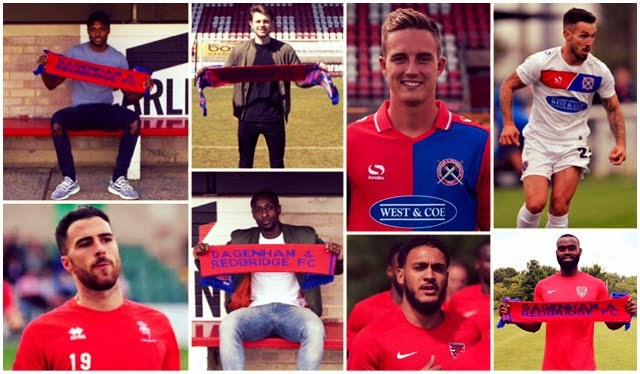 Harold Odametey:    9/10   Age: 26 Position: Midfielder Last season’s performance: Below is a Video of last campaign 7:07     Harold Odametey: Maidenhead United 18/19YouTube -     2 May 2019  Apps.    Goals.    Yellow/Red     44.            1.                7/1 My view: Harry Odametey was nearly an ever-present in Alan Devonshire’s Magpies XI - not featuring in only 180 minutes of first team action. This record alone is encouraging, signing a player who has had a lot of game time in the National League over recent years, however his goalscoring record may concern a few. He matched Dagenham’s No.6 Robinson’s goalscoring record with a solitary goal last campaign with Harold’s also coming in a close encounter which ended in victory - Odametey scored in his side’s 4-3 win over Aldershot. Though his goalscoring record is undesirable his ability to drive with the ball with an attacking mindset makes him a midfield powerhouse - he stands at 6ft and is a force
Post a Comment
Read more
More posts