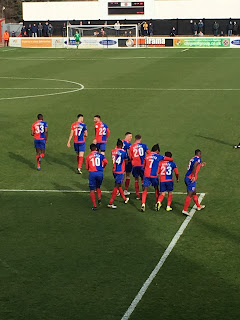 It was a day that Dagenham remembered Jodie Chesney who was stabbed in Harold Hill on March 1, in a gesture to celebrate her life there was a minute’s applause before the game got underway. With purple ribbons and balloons around the stadium to pay further respects the visitors took the kick off, but just minutes in conceded a free kick that would prove costly. Angelo Balanta opened the scoring after Munns whipped in a perfect free-kick which the Colombian headed home on his return to the side - they couldn't have asked for a better start, after weeks out Balanta had made an instant impact.

In search of an instant response to the colombian’s fifth Daggers goal Coulson tried his luck from 25 yards, but it proved no real test for Elliot Justham. Up the other end fouls were being committed all over the shop as Wilkinson proved a handful for the Bromley back line. Upon the fourteenth minute Munns played one of those free kicks in a dangerous one at that and Wilkinson was there to get on the end of it and doubled the hosts’ lead - it was a dismal start from Bromley!

The visitors got a rare shot off on the edge of the box, but Raymond fired his effort over. After a brief lull in goalmouth action the hosts continued their dominance, closing in on a third, as slick passing saw Balanta find Wilkinson whose effort from a tight angle was saved by Gregory.

Twice the Daggers were denied by last-ditch blocks, first Balanta saw his short-range effort blocked and then Wright was denied by the visitors’ No.1. Just prior to the interval,Wilkinson won another free-kick as the away side’s defence continued to struggle to cope with his physical presence. The resulting free-kick from Munns however was headed clear.

The last play of the half saw Coulson take a shot from the edge of the box, but Justham saved it without an issue.That save wrapped up what was a dominant first 45 display from the home side who showed little signs of vulnerability. On the other hand Bromley were lacklustre and showed no real threat going forward.

Dagenham got the second half underway but didn’t begin in the same fashion as the first. Hooper got in behind Manny Onariase, but Justham stood tall and blocked his effort. However McQueen got the hosts going again as he whipped in a dangerous free-kick, but Gregory did well to punch the ball clear.

Angelo Balanta’s brilliant turn on the edge of the area saw him dance round two defenders but after doing the hard part his shot was blocked. In an attempt to reduce the deficit Bromley went on the offensive but Hooper couldn’t quite get his header on target in what was a rare opportunity.

Moments later, Chike Kandi replaced the brilliant Balanta who returned after nearly two months out. That change was greeted  by some Justham brilliance as the keeper changed his direction after a deflection off a header from Bugiel and saved with his foot. It was rather spectacular!

However the hope of a Bromley revival was short lived as super sub Chike Kandi made it two in two scoring a lovely solo effort! He nearly bettered his tally cutting inside but was denied by the outstretched Gregory. The eventual man of the match Connor Wilkinson whose goalscoring tally is nothing short of excellent was then replaced by Adeloye.

Summing up Gregory’s poor performance that had been littered with mistakes the visitors’ No.1 picked up a back-pass from Johnson. Luckily for him that mistake didn’t effect the score line. Daggers substitute Adeloye made a superb run and was picked out by Gordon. However he couldn’t quite make it four for his side as he tried to chip Gregory, but the goalkeeper was equal to it.

The referee indicated there would be a minimum of three additional minutes to end the half with Dagenham’s win then surely sealed. Though all three points were assured,a clean sheet wasn’t, and a consolation goal looked likely, but Bromley headed over from close range before Alan Dale signalled the end of the encounter. The Daggers securing that win looked to have secured National League status for next season widening the gap between them and the top to 12 points.