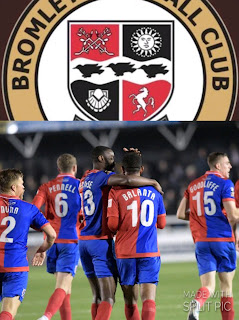 It was a relatively short trip over the Dartford crossing for The Daggers as they hoped to make it four wins out of five. However, Bromley stood in their way a team who were in search of a win after back to back defeats. Play commenced with the home side but their Essex counterparts were working hard off the ball early on with Wilkinson especially hassling the back line. The hosts won the first set piece of the half as Pennell was put under pressure forcing him to concede the corner kick, but luckily for him it came to nothing.

Another Daggers defender sprung into action worrying the keeper early on as Ben Nunn's long range effort hit the top of the net as it just sailed over. The skipper helped his side out in attack again as his cross found Balanta but his attempt didn't trouble Gregory between the sticks. The Ravens proved a threat on the counter as Manny Onariase was involved in an effort that saw him throw himself at the ball to deny the home side's new loan signing Jack Barham. Dagenham had looked more threatening early on and that was soon reflected in the scoreline as Wilkinson opened the scoring making it his second in two games. McQueen was the man with the assist with his low cross finding the Irishman who calmly slotted it in from close range - he showed great composure.

Their lead was by no means a comfortable one as Bromley were instantly knocking on the door for an equaliser with a series of chances just not finding the back of the net. This included a great strike from Barham that was met by an equally spectacular save by the man in form Elliot Justham. In the 26th minute Onariase was caught out at the back by former Wood man Quigley who played in Barham, but his effort didn't cause any threat to goal. After a tense 10 minutes for Dagenham there was an element of humour as Goodliffe, unaware of Justham who was in possession of the ball, tripped over the visitors' No.1 who was lying on the floor as he looked to slow Bromley's momentum.

Angelo Balanta looked to make it onto the score sheet with a first Daggers goal but his headed effort was kept out well by the Bromley No.1. Wilkinson also looked to test the keeper this time in a similar fashion to his captain as he saw Gregory off his line but the keeper caught it and Dagenham still lead by just one goal. Quigley wanted to change that though in the last action of the half but he wasted the opportunity to put his side on level terms somewhat as his effort went closer to the corner flag than the goal. Despite the late pressure Dagenham would have been content with how the first 45 played out with them being ahead and proving they were more than capable of beating this Bromley side.

The Daggers looked to make it two straight from the off after good work from McQueen saw Phipps with a sight on goal but he couldn't quite get his shot off. Balanta had yet another chance a few minutes later as he managed to get a shot off but Gregory denied him. Smith looked to make a change in order to get his side back on level terms by bringing on George Porter a sly and nasty character. His presence seemed to have a negative effect on Dagenham who began to play very deep and invite Bromley onto them. After a series of attacks Bromley won a corner that proved to be the first of a few. What happened next was unexpected, the policeman was called into action to play the ball back over the barriers and he did it in style with a couple of kick ups before stylishly knocking it back over to the Bromley corner taker.

The Daggers managed to deal with the aerial bombardment which saw Porter head the ball towards goal but he didn't become a super sub. The visitors' goalscorer Wilkinson made way for the pacey Chike Kandi on the 65th minute but that didn't relieve the pressure. This time Brindley put a low ball across but there was no response from The Ravens attackers. It was Justham time as it hit the 70th minute mark with the Dagenham No.1 denying the hosts left, right and centre with some being certain goals. Substitute Mekki looked to make it a grand stand finish with his attempt being beaten away on the 75th minute.

Chike Kandi was another man who looked to make an impact off the bench his effort was palmed away by Gregory who got down well. Three minutes later Jack Munns was replaced by Gordon, the mini midfield maestro proved vital for The Daggers with great work rate and link up play. It's always nervous watching from the sidelines as your team look to defend a one goal lead but Munns' nerves were eased after about a minute as Balanta made it two! After a number of missed chances he had finally scored his first Dagenham goal, capitalising on the defender's lack of urgency he placed it into the far corner - Gregory just couldn't get to it.

There was a sense of relief in the away end at Hayes Lane but the game was far from over and stranger things had happened in football over the years. An instant reply from The hosts would have seen them in with a chance of snatching a point, however Justham was determined to keep a clean sheet after he tipped over again what looked like a certain goal. The fourth official indicated a minimum of four minutes added time and Bromley continued to pile on the pressure. But they had no major chances in those last few minutes and Dagenham had secured another three points that saw them climb out of the relegation zone and into 19th. On Tuesday The Daggers face a tough test against Havant in what is a huge game at the bottom of the table as Dagenham & Redbridge continue their surge.