It was a special day at Victoria Road as the club paid tribute to Dave Andrews a man who adored Dagenham and Redbridge and was instrumental in the club's merger and success. The Daggers faced AFC Fylde on the special day who were unbeaten on the road this season and stood sixth in the league. The hosts got the game underway but just over thirty seconds later Fylde found themselves in front after a well worked move forced a fabulous save from Justham but it wasn't enough as Andy Bond fired home for the visitors - it was a nightmare start for Dagenham!

The very slow start continued for the home side as AFC Fylde were playing them off the park and just a lot sharper all over the pitch. All over the pitch that was apart from when it came to the keepers as Elliot Justham pulled off another great save as Gime Toure's great work saw him cut in and have a shot on goal. The home side were living dangerously as this time Nick Haughton was played through as Dagenham were dispossessed in midfield but Manny Onariase came to the rescue with a timely challenge.

Jack Munns also started to kick into gear after a slow opening 12 minutes that saw his side go behind as he began battling more like himself hassling the Fylde men on the ball. However not everyone was as alert as him and just a couple of others allowing Haughton to get a shot off that looked like rocketing into the top corner but Justham superbly saved it again. After yet another astonishing save from The Daggers No.1 the Essex side began to get a foot hold in the game their first opportunity coming after a mistake from Fyde's back line. That mistake allowed McQueen to be played through one on one but Lynch did well as a heavy touch from the attacker helped him clear the danger.

Soon after they won a corner having their first real spell of the game but that was cleared in style by The Coasters as they played the ball out of their own box looking to attack. That attack came to nothing as Dagenham gave the away side a taste of their own medicine playing the ball around with ease but the only man who touched it in the final third was Lynch Fylde's No.1. But they din't have to wait long for another opportunity which they took with both hands, as the ball was with Wilkinson on the edge, who knew where they goal was, taking one touch and it was in the back of the net - a great low driven effort.

That was exactly what the home side needed as they were slightly under the cosh at the time of the goal. The Coasters looked for an instant reply after Connor Wilkinson's first goal for The Daggers made it 1-1, they nearly found it as a dangerous free kick was headed just over. The home side also came close as hard work from their goalscorer won the ball back and helped Balanta get a shot off but his effort was deflected into the keeper's hands. Miscommunication between Lynch and his colleague conceded a corner before the break but luckily for them it didn't prove costly. The last action of the half was also negative from a Fylde perspective as Kellerman was booked for a late challenge on Matt Robinson.

So at the close of the half both sides would have been relatively happy Fylde possibly more so as they dominated the majority of the half. On the other hand Peter Taylor's men would have be hoping for a quicker start than in the first half and perhaps more attempts on goal as they looked to pick up the points. Fylde got the second half underway and won a free kick in the opening minutes, Rowe went for goal but it was blocked by Connor Wilkinson. The visitors had the better start again in the second 45 as they came close to scoring a second after a scrap in the box that saw Ben Nunn throw himself at the ball - The Daggers were relieved as Kellerman's effort into the ground went over.

Taylor introduced Chike Kandi who replaced Wilkinson providing more pace up front as Dagenham pushed for a winner. He made a quick impact in terms of pace providing an outlet as the hosts broke from a corner but he was dispossessed on the edge of the Fylde box.  Another chance arose just a few minutes later as Alex McQueen was released down the right and he put in a great low cross to Jack Munns who got his first goal for The Daggers - he deserved his goal as he had worked hard all game! However there was very nearly an instant reply with Nick Haughton rattling the post as for the first time in the match Justham was beaten!

Former Dagenham man Ashley Hemmings came on as he looked to haunt his old side for whom he was a fan's favourite. It was that man Justham again, who just seemed on another level, that denied Fylde an equaliser as Haughton's effort was deflected therefore Justham had to claw it off the line after he had already dived the other way - he did incredibly to get a hand to it! The Daggers so nearly got a third but Robinson's effort was cleared off the line after Balanta's great run and Kandi's set back to Robinson saw him have a clear sight of goal but he was denied by Byrne!

Luke Pennell was key to The Daggers defence in the second half especially the last fifteen as The Coasters continued to push for an equaliser. However it was Justham who continued to steal the limelight as he this time denied Toure whose header looked to go into the roof of the net but The Daggers keeper tipped it over. Unsurprisingly and deservedly Elliot Justham received the Man of the match award but his side still had to hold out for the next four minutes of added time. Two consecutive corners followed for the visitors with two clearances at the front post by Robinson. And the referee blew his whistle, it was two consecutive home victories for Dagenham and three wins in four as they continued their mission to climb the table. 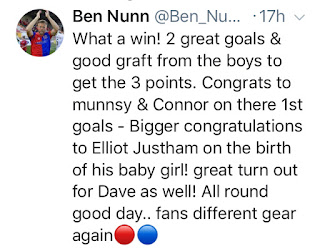