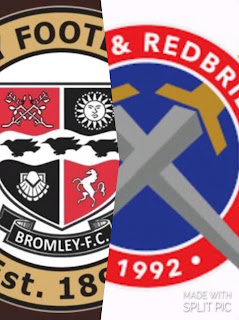 An away trip to Bromley awaits as Dagenham and Redbridge look to make it above the dotted line come Saturday evening, as they watch 'I'm a celeb' resting ready to make it back to back wins on Tuesday. Before they can do that though they will have to beat today's opposition who sit in the bottom half of the table just five points better off than The Daggers. So those thoughts of Harry Redknapp facing the bushtucker trial will be put on hold as a win in Terry Harris' words 'will make things look a lot better' for a Dagenham side where things are just getting better.

On the contrary, Neil Smith is hoping to 'turn things around' after a bad run of form has seen them slip down the table just five points clear of the drop zone. He added that he wants to 'put on a show' at Hayes Lane, therefore Dagenham will have to be switched on at the back and work hard in midfield to stop the home side from playing. A danger to the visitors is Frankie Sutherland in midfield for The Ravens who will look to be the star of the show and make it into double figures in terms of goal scoring this season. It will take a stunner to get past Elliot Justham though who was man of the match last time out and is it's fair to say 'a man in form'.

Taking a look at the away side, up the other end of the pitch there is a new boy in town going by the name of Conor Wilkinson. The Irishman netted last time out against Harrogate Town and is looking to make it two in two against a side who have lost three of their last four in all competitions. A player who has been in conversation with DaggersTV  this week is Harry Phipps who has had to earn his place in the side after being told by Taylor he had to work on moving the ball faster. He will have some help with that on today's artificial surface at Hayes Lane as he and his side 'look to keep competing and climbing the table'.

So both sides are positive going into this one with The Daggers going in higher on confidence -
I am going 4-1 DAGGERS! #COYD