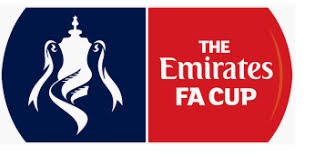 So it is that time of year again the FA Cup is here, the holders having just played in the top flight, The Daggers faced Boreham Wood at Meadow Park. The Wood tipped as favourites when the tie was drawn and they were even stronger favourites as it came to kick off with Elliott Romain arguably Dagenham's best player departed on Friday. So everything seemed to be in their favour going into their game at home to fellow National League side Dagenham, 11 places separate them in the league but this is the FA Cup ... anything can happen.

The game got underway at Meadow Park with The Wood on the front foot as Ugwu's effort from twenty yards saw the home side get an early sight on goal but that didn't trouble Justham. It was Ugwu again on loan from Chesterfield who got in behind whipping an inviting ball in but that inviting ball had no reply. The visitors finally had their first chance come 13 minutes in but Donovan couldn't quite get his effort on target as it went wide of Huddart's goal. A minute later disaster struct for the underdogs as Umerah was brought down by a rash Justham and the ref pointed to the spot. Josh Umerah converted scoring his seventh of the season and his first in the FA Cup, this is exactly what The Daggers didn't want to concede an early goal.

So The Daggers now behind were already at a disadvantage just with fifteen minutes gone, they had plenty of time to score but so did Boreham Wood who now looked to get a two goal cushion. The next ten minutes would prove fairly encouraging for the inexperienced visiting side, getting the ball into the opposition box but Kandi wasn't proving clinical. Despite being on top for a small period, the home side's attacking threat wasn't going away as Ugwu continued to cause The Daggers defence problems. A Dagenham defender was posing an attacking threat of his own as his glancing header from a second consecutive corner sailed just over.

The Wood picked up the pace  going into the break with chances from left right and centre Goodliffe came to the rescue with a great block from an Umerah effort. Justham denied Ugwu in a 1-on-1 situation after a superb challenge taking it from the feet of The Wood forward. So despite being a goal down The Daggers wouldn't have felt too disheartened at the break knowing just one goal was the difference. On the other hand The Wood would have felt in control but weary and looked to have got another before the break, thinking an early goal would put the game to bed in the next '45.

The Daggers 1-0 down started the second half the better of the two sides as Nunn's run and cross was cleared by The Wood, there was then again cause for concern as Robinson was on the ball his volley from 25 yards went just wide. Goodliffe's first action of the half was a good clearance as Ugwu tried to cause problems with a low cross into the box. On the 60th minute The Daggers made a double substitution with Adeloye and Munns coming on for Kandi and Mullings. Goodliffe and Ugwu were in isolated competition as they contested for a loose ball but The Daggers keeper rushed out to claim it.

With twenty five minutes remaining Ugwu looked to put his side two goals to the good but his effort from a Murtagh cross was just wide of the mark. Former Dagger Femi Ilesanmi looked to put his current side in a more comfortable position but twice his low balls into the box were cleared by The Daggers' defensive line. A change for the home side came with eighty minutes played as Umerah was replaced by Justin Shaibu. He made his presence known with instant involvement, his low cross to Ugwu saw him get a shot off but that shot was somewhat rushed and not one of great quality.

Shaibu was superbly denied by Justham after The Wood striker's excellent work taking a long ball down on his chest saw him dance round his marker but Daggers' No.1 denied him a goal. The visitors couldn't hold him out for much longer though as he again got past his marker but this time slotted it into the bottom corner, their super sub had eased the nerves of every Wood supporter. It didn't look like it was going to be Dagenham's day as another long range shot from Robinson was this time tipped over from Huddart - he was denied again!

The fourth official had indicated four minutes so any nerves the Boreham Wood supporters had were surely no longer as there were no indications of seven minutes like England's international against Spain. Those nerves where then again built up as Femi had gifted his former side a penalty and a possible lifeline as Adeloye converted after being tripped in the box! The excitement was far from over, could it be a miraculous comeback? Or could the hosts hold out? The answer was only moments away as Pennell got his head on the end of a great delivery and made Huddart's net bulge. The Daggers fans couldn't hold back their excitement as the players joined them in celebrating a touch of FA Cup magic. That proved to be the last action of the game, whilst The Daggers rejoiced, looking forward to a replay at home, The Wood stood head in hands startled at the events of the last 5 minutes. 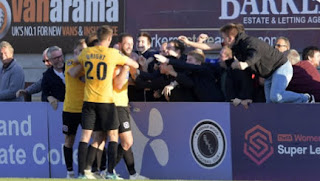 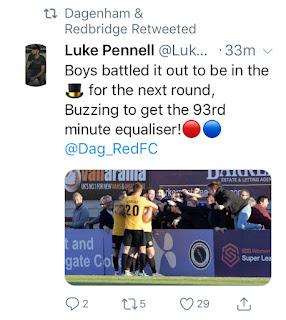 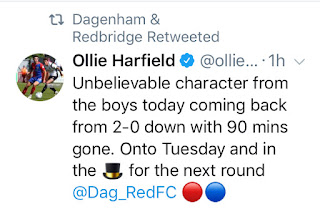