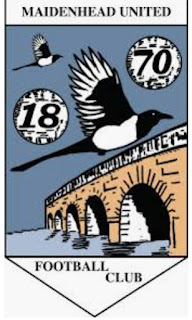 Dagenham gained a creditable draw as debutants Adeloye and Mcqueen impressed when they came off of the bench. Tomi Adeloye started the second half as he began his campaign in front of a loud Victoria Road.

The young Daggers went into today's game knowing defeat wasn't an option if they were to climb out of the relegation zone. Taylor made one change from the defeat to Maidstone bringing in Harfield in for Phipps. Maidstone got the game underway in Essex and it was the visitors who had the first promising chance of the game as Bird got into the box but his effort went wide. Another chance for the side in black and white striped shirts came soon after as their well worked move caused a threat before it was cleared by the head of Wright.

The home side's first move up the field didn't advance beyond the 18 yard box as it broke down, too easily in my opinion. Pentney had his heart in his mouth as a mix up at the back, caused by a lack of communication, nearly saw Reynolds poke Dagenham into the lead, but it was cleared for a corner. The corner was whipped in by Harfield and air kicked by Wright on the edge, had he connected it may have been a very different story. Up the other end Maidenhead won a corner and once it was whipped in there was only one head it was going to meet, as Ayo Olibeye leapt higher than the rest to nod it home.

Dagenham paid for the missed chance from Reynolds however they were not too disheartened as they had plenty of time to make it up. The Daggers then broke soon after, with Elliot Romain leading the attack, he was hacked by Maidenhead's No. 24 Massey brought him down. The subsequent free kick was poor however, from half way Hoyte found the hands of Pentney who this time actually managed to get the ball into his grasp. In front of the Bury Road terraces Clerima's effort rised over as he got his foot under the ball instead of his head over it.

The Daggers won a corner after a well worked attack, which saw Steer go down injured. The taking of the corner was delayed somewhat as Steer received treatment for a lengthy period, unfortunately it wasn't worth the wait as it was headed behind. Since the goal the hosts had looked on top, but the familiar problem of the final ball wasn't going away. Again Pentney was challenged by Reynolds however this time he dealt with it himself, pouncing on the ball he was forced to parry.

Maidenhead were proving stronger in the air and physically as a collective. Although, Kandi was one player who seemed unfazed by the visitors' physical game. He won the ball back and ran at the away side's defence before being forced to run the ball out of play, conceding a goal kick. Dagenham came close again as Reynolds' half volley just outside the 6 yard box forced a great save from Pentney. Kandi  did well as he picked up the ball out wide and began running into the space before cutting inside and seeing his curled effort just go the wrong side of the post. Just before the whistle Maidenhead won a free kick outside the box which was floated in to the back post where it was headed over.

Dagenham would have been annoyed at their marking on the corner and Reynolds along with Kandi frustrated they couldn't put their side in front. However, that soon had to be erased from their memory as they went at it again for the second half. Well, at least from Kandi's as Reynolds made way for debutant Tomi Adeloye who was no doubt looking to score on his debut. A low ball across worried The Daggers back line, but it caused no danger in terms of scoring, as the move resulted in Worsfold shooting down Justham's throat. Kandi was frequently beaten to the ball by Herson Alves who was winning the majority of the 50/50s between the two as well.

The home side needed to improve in order to get anything out of the game. A Dagenham corner saw Wright get under the ball instead of over it as his header fizzed upwards causing no danger to goal. Another Daggers set piece saw a great delivery go to waste as the ball was headed over. Chike Kandi then made way for debutant Alexander Mcqueen. The lack of precision from Dagenham made it seem unlikely they would score also their performance in front of goal was a cause for concern. Romain was running towards goal before he was brought down by Massey who had previously been given a yellow card, then Finnie reached for his pocket and got out the second yellow and red! As Massey had been dismissed, Harfield stood over the free kick but nothing came of it - a poor effort in truth.

The hosts continued to push for an equaliser against the ten men of Maidenhead and their efforts were rewarded with a goal as a ball over the top fell to Mcqueen who hooked it over Pentney. The former Spurs youngster had scored on his debut, this was met by jubilation from team mates and fans. Donovan then went into the referee's book for a foul on halfway, the free kick that followed then went over the bar. Harry Donovan was then replaced by Blanchfield who was ready to make an impact. It was a ball in from Blanchfield that nearly caught Pentney out but he had it covered. Nana Owusu then had a crack from outside the box and his powerful effort soared past Justham into the bottom corner; the closing down was poor.

The Daggers thought it couldn't happen to them again but it was looking that way after a few chances including a set piece didn't find the back of the net. One corner was whipped in and it was blocked efforts galore before Maidenhead cleared. The hosts were not going to see another three points slip away as they kept at it and eventually they found the net. Elliot Romain was in the right place at the right time as he turned it in from close range. There was then a push for a third goal and three points but the ultimate comeback wasn't possible as after four minutes of additional time the whistle blew.

Dagenham & Redbridge climb out of the relegation zone as they have registered their first point whilst Maidenhead remain in the drop zone on goal difference. 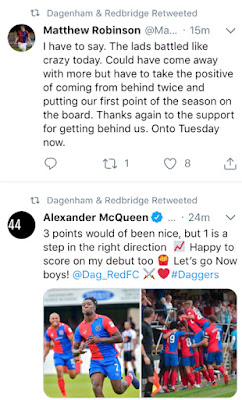 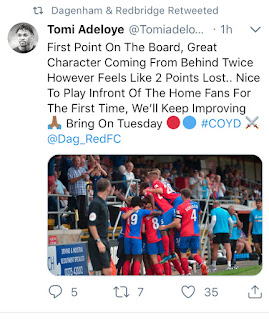