Halifax Key Battle 3: Between the sticks 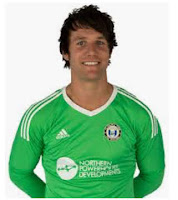 
Both keepers have played every minute of every game this season but Johnson has probably had a more successful season so far. This is how the two compare:

So we know about our man Justham, but who is The Shaymen's Sam Johnson?

Sam started his career at Port Vale and after loan spells at a few clubs including Gateshead and Halifax, where he had two loan spells. He then moved on a free transfer to The Shaymen at the start of last season where he made 44 appearances and accumulated 3 yellow cards and 1 red. He has made a fabulous start to this campaign with three consecutive clean sheets but that fashion ended on match day 4 against Salford where his side went away with 0 points and -1 goal difference losing 2-1 to Salford. Johnson and Halifax will be looking to bounce back against an inferior Dagenham side that despite on paper look a walk over, are a tough test for any team on their day.