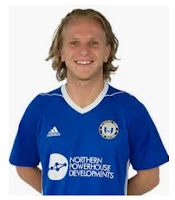 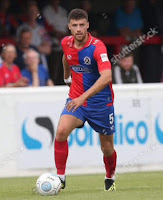 Alex will be hoping to start against Halifax however he isn't exactly the first name on the team sheet. He didn't feature in Peter Taylor's first XI against Boreham Wood but fellow centre half' Goodliffe's red card saw Davey take his place for the entirety of his suspension. Davey showed quality so whether he is picked against Halifax will be interesting, he has a lot more experience than Ben - but that isn't everything. Davey was yellow carded last time out, as well as being the man who gave away a free kick which led to a corner where the goal came early on. Despite that mistake he remains a good asset to this Dagenham & Redbridge side.

Kosylo is a man who provides an attacking threat as well as a few goals for Halifax, the last time he scored being Tuesday night as they lost 2-1 to Salford. This is his third season with The Shaymen in that time he has scored 20 goals but his temperament seemed to be his downfall last season as he accumulated 11 yellow cards along with one red. This season he will hope to keep a cool head as his anger got the better of him last campaign, no doubt Alex Davey is aware of this and will look to capitalise on this weakness.

Age: 23
Senior Apps: 63
Daggers debut:
His first appearance for Dagenham came gainst Maidstone in the second game of the season where The Daggers were defeated 2-1.

Age: 26
Senior Apps: 71
Shaymen debut:
Kosylo's first appearance came in a 2-2 draw with Altrincham in the National League North where he came on in the 66th minute.