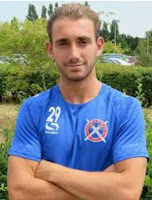 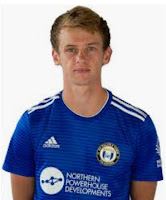 
Harry is on a six month loan from Millwall where he is yet to make a senior appearance but at 19 he is out to prove his talent. So far Harry has played every game so far this season, he is yet to put the ball in the back of the net but his desire and fight has put him among the fan's favourites. He has picked up one yellow card in four games testament to his desire, Harry will hopefully shine at The Shay as he looks to dominate the midfield. He is obviously a signing who Peter Taylor trusts and someone who he sees a lot of potential in.

Unlike Harry, Cameron King has got off the mark in terms of goal scoring as he helped The Shaymen on their way to a 3-0 victory at home to the Stones; scoring his first senior goal. Cameron is 22, three years older than his midfield rival. His move to Halifax in the summer saw him join fellow scot and manager Jamie Fullarton who spoke highly of King upon his arrival. King appeared for Scotland at U21 level and has a bit more experience than Donovan. However, he has also had a lot of game time so far this season playing all four games so far.

Age: 19
Senior Apps: 4
Daggers debut:
His Dagenham debut came against Boreham Wood in Peter Taylor's first competitive game in charge of Dagenham. But it wasn't the start he and his side were looking for as they lost 1-0 at Meadow Park.

Age: 22
Senior Apps: 14
Shaymen debut:
King made his debut against newly promoted Braintree where they won 0-2 however he didn't start but came on in the 79th minute as he was introduced to the Halifax fans.