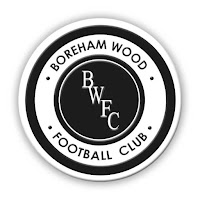 
In their second game of the campaign the Daggers travelled to Meadow Park in their pursuit for two wins out of two. John Still unsurprisingly named an unchanged side. They went to Meadow Park to play a side that got their campaign underway with a 2-2 draw at AFC Fylde so could they go one better at home to Dagenham & Redbridge.

Well Boreham Wood got things underway at Meadow Park and started the liveliest but a poor header back to Smith by defender Tom Champion was pounced upon by Daggers’ Fejiri Okenabirhie. This launched Dagenham into the lead along with a flare from the away supporters in the 2nd minute.

The Wood continued to attack and push for a quick response with a few dangerous crosses not met. However, the home team’s resilience was finally rewarded when they were awarded a penalty as Lokko brought down Andrade in the box. Andrade himself smashed it top bins in front of the visiting fans; whom he after 7 minutes wasn’t popular with.

It was end to end stuff with set pieces being awarded to either team, one of which was awarded to former Wood star Morgan Ferrier just outside the box. Daggers fans were full of confidence as their favourite Corey Whitely was standing over the ball and they were right to be as he placed it perfectly top bins.

Daggers looked the more dominant as they went back in front however the hosts looked dangerous on the break.

The last attack of the half saw a clear-cut chance go wide for Okenabihrie. However, the visitors will no doubt be the happier side going into the break.

Dagenham got us back underway and looked like they had started from where they left off as they started off livelier. The Wood looked to be increasingly frustrated as they couldn’t break the offside trap set by the visitors’ defence.

Boreham Wood’s finishing seemed to be letting them down as Dagenham began to sit back.

Hawkins was brought on, no doubt he was told to pick up the pace of the game, this was helped by some fresh legs in midfield in Robinson and Howells. Dagenham were pushing for a third but the home side were just about holding out. As Hawkins’ effort was punched off the line by Smith.

Boreham Wood seemed to want it more judging by the challenges in the middle of the park; they were linking up well down the right.

Dagenham were getting bombarded in the closing stages as Andrade rattled the bar. After 3 minutes additional time the referee finally blew his whistle - much to the delight of the Daggers. It was a perfect start for John Still’s men!