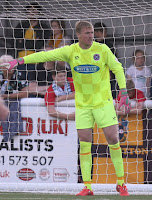 
Elliot had a season on the side line after Still favoured Cousins over him and there was also a few minor injury concerns. He didn't feature at all last season compared to 43 in 2016/17 this has no doubt made him even more determined to do well. With Cousins gone he is out there to impress, and Elliot didn't disappoint in the first game against Boreham Wood.

Worgan is a familiar face around Maidstone as he went five seasons without hardly missing a league game! That's loyalty for you. At 1.85m the Stones man is a tall figure and big frame to get past, Lee is focused on improving Maidstone's finish from 19th last season. At 34 he is an experienced keeper who has another couple of seasons in him.